“Trying to make sense out of this film is like waiting for a dwarf to grow.”

French writer-director Alain Robbe-Grillet (“The Blue Villa”), noted novelist of such books as Dans le Labyrinthe and La Maison de rendez-vous, and screenwriter for Resnais’s Last Year at Marienbad, helms this diverting surrealist film that explores the mind, is erotically-charged and it’s as weird as hell. It’s mysteriously built around a number of Magritte paintings and its leitmotivs. Despite a narrator (Michel Auclair) trying to clear up all the dead ends, it still manages to be one of those works that is best determined by each viewer since there’s no sure resolution. It manages to juggle a number of stunning visuals covering such diverse subjects as dreams, spiritualism, experimental psychology, murder, vampirism, classical music, neo-noir, Magritte paintings and suspense. The experimental narrative has more false starts than a Yugo. Robbe-Grillet and cowriter Franck Verpillat script it as an enigma, where nothing is what it seems. Trying to make sense out of this film is like waiting for a dwarf to grow. Which means it’s strictly for the artsy-fartsy crowd, who can ignore the story’s pretensions and get to the mind-blowing dream within a dream stuff and all the other fanciful assaults on mankind’s rationality without need of the usual film denouement.

Walter Raim (Daniel Mesguich) hangs around the bar of the Matchu club and dances disco style with a pretty blonde in a see-through black dress, whom we later learn is named Marie-Ange van de Reeves (Gabrielle Lazure). Before she vanishes poor Walter doesn’t get her name or phone number, because she only laughs teasingly at him and refuses to give it by saying she lost her name and her phone is disconnected (well, that’s better than getting the number of the firehouse!). When Walter’s boss calls, Sara Zeitgeist (Cyrielle Claire), a hot chick dressed in black leather and riding a motorcycle, he puts on his trench coat and receives orders to deliver an urgent sealed letter to Count Henri of Corinthe. Don’t ask the nature of the organization Walter works for, because you won’t get a straight answer. On the deserted dark road Walter comes across the bloodied and bound body of the sexy blonde in the club, in the middle of the road, and brings the injured lady to the nearest villa where the lights are on. There a group of tuxedo-ed older men, seemingly in the middle of a coven, like that scene from the more recent Eyes Wide Shut, offer the girl a Bloody Mary and then a sinister looking Dr. Morgantodt (François Chaumette) locks the couple in a bedroom. Our boy makes love to her and is assailed by visions of the Magritte painting from the title, hanging on the bedroom wall, where we see those theater crimson curtains that are open to a windswept beachfront. In the morning Walter has a vampire bite on his neck courtesy of the hottie he balled last night (I thought that was a problem modern men no longer had to contend with!). When blondie is no longer there in the morning (which I guess proves she’s a vampire), our confused patsy finally goes on his mission. But he finds the Count just died of a heart attack, and he’s become the main suspect in the blonde’s disappearance according to this real creepy looking cop (Daniel Emilfork). Walter learns from the bartender at the Matchu club that the girl he was with is named Marie-Ange van de Reeves, the daughter of a professor of spiritualism (Roland Dubillard), and that she died seven year’s ago from a beach accident. What’s real and what’s a dream, who can say from such pretensions. In any case, Walter is in the hands of Dr. Morgantodt, who uses a device with electrode attachments to his head to extract his brainwaves and this releases video images of that same Magritte painting and a scene where Walter is about to be executed by a firing squad dressed in black.

It’s high concept cinema made for dreamers and those looking for the unusual and those in need of a Godard fix from someone who is not Godard. Somehow it kept my attention, but I never could quite get over thinking it’s a pile of beautiful looking crap and has about as much to do with exploring the mind as sardines. 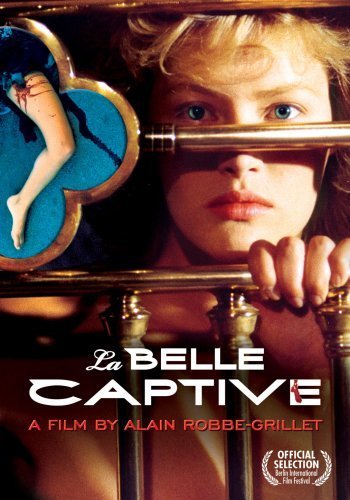