“One may justifiably ask, as many critics did, what was Scorsese thinking when he made Kundun?”

One may justifiably ask, as many critics did, what was Scorsese thinking when he made Kundun? Is he capable of making a film on a subject he has only a limited knowledge of? The first question is a snap to answer, he was thinking about the 14th Dalai Lama and the suffering of his people. He would therefore make a political statement about the Tibetan situation and show the outrages their culture is going through in the hands of the conquering oppressors, the Chinese Communists. The style of the film is semi-documentary, allowing nonprofessional actors to dominate the film (they did a great job). The second answer is subjective, and is up to the viewer to decide.

The film begins in 1937, showing the joy and pride for the Tibetans of the 14th Dalai Lama being chosen at the age of two. It ends on the sour note of his forced departure in 1959.

In between, the story is told from the Dalai Lama’s point of view, as he grows up quickly and is faced with worldly decisions for his people at the tender age of 14. His sense of reality is enhanced by his inner experiences in the form of dreams and meditation. His nonviolence is steadfast, despite reasons to feel anger at the Chinese for their atrocities and barbarous attitude toward his country. What is most brilliant is the camera work that focuses clearly on all the chaos and religious nuances, and records them in a way acting could not duplicate.

The shortcomings may or may not be in the second question asked: Whether Scorsese is capable of gleaning the truths of Tibetan Buddhism, since any film about Tibet has to comprehend the influence religion plays on its people. I think Scorsese wants this film to be seen not necessarily as a religious experience, but as a spiritual calling that people of different faiths from all over the world can share in. This film is noncommercial, thereby it doesn’t have to satisfy the wants of those who demand to see a film in a prescribed way. For me, that this film is successful and worth seeing becomes apparent rather quickly, especially, when you compare it with the other recent film that tried to explore the Tibetan situation, Seven Years in Tibet–it should become obvious how Scorsese’s film towers over that one in perspective and feeling. For Christ’s sake, the other humanitarian film used a Nazi as the hero of the story which made it very difficult to feel very trusting of the film’s aims; especially, since no one even mentioned a little thing like a Holocaust taking place in the Nazi’s native country.

The weakness of Kundun is that since Scorsese wasn’t confident or knowledgeable enough about Tibet and its Buddhist religion, he had to use the Dalai Lama as a source of reference for the film. Even though the film might be authentic in scope it, nevertheless, lacks the artistic spark of spontaneity a great work of art must have. Instead, this well-meaning presentation gets bogged down in its own propaganda and the movie gets blandly trapped in its own goody-goody approach. Now the exception to this, is that marvelously original Dalai Lama dream sequence, the one of impending doom for his country as he dreams of the monks in their red robes all lying dead in the field. We see a human being who is concerned because he feels that maybe he doesn’t know everything, even if he is expected to because of his position.

I, for one, never fully trust those who are held up on a pedestal as incarnations of what is good. And films that lose their ability to penetrate all that makes things tick inside their characters, lose a certain amount of integrity. But this film avoids those pitfalls and is able to present the Dalai Lama as the true compassionate world leader he is.

Though Scorsese’s film is not a masterpiece, it certainly accomplished what he wanted it to do and therefore with that limited objective in mind, I find it easy to recommend this film; even though, I consider the HorseThief to be the best film on Tibet to date. But I realize that the subject matter of this film is exceedingly important and should be seen by a wide range of people. After all an entire culture is being wiped out in front of our eyes, and people must be made aware of it. The media has not done a good job in this regard, and maybe a film such as this can somehow compensate somewhat for that past neglect. 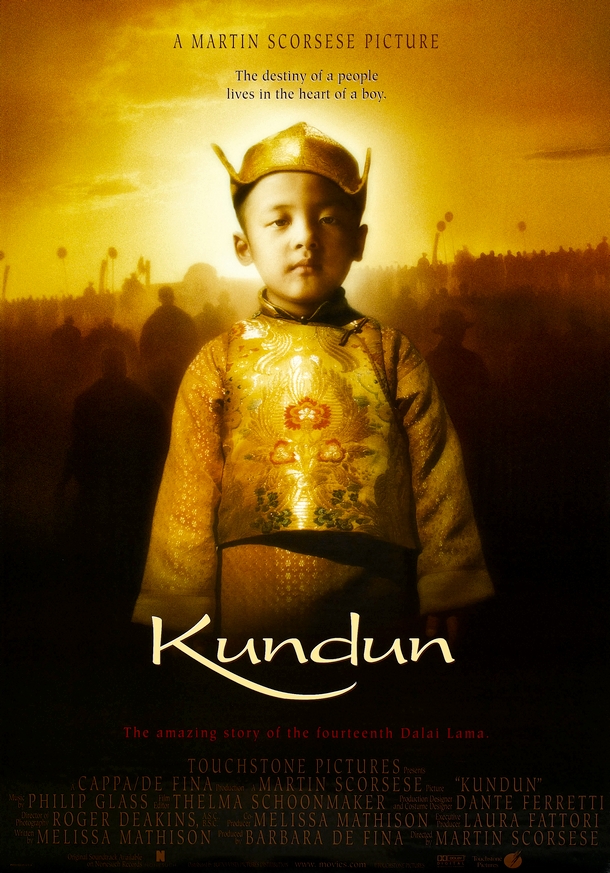