“I can’t think of a musical biopic I liked better.”

A unique musical biopic on Johann Sebastian Bach (1685-1750) directed with brilliance by French New Wave enthusiast Jean-Marie Straub (“Not Reconciled or Only Violence Helps Where Violence Rules”/”Moses and Aaron”), a Frenchman who moved to Germany when he was 25. It’s co-written by Straub and his wife Danièle Huillet. In its narrative’s simplicity it uses the fictionalized diary of Bach’s second wife Anna Magdalena Bach (Christiane Lang, a singer), who provides the voiceover (using the same voice tone as Bach and keeps things real even if Anna never left a diary; The Short Chronicle of Anna Magdalena Bach by the English author Esther Meynell was a best-seller in Germany in the 1920s and served, at least, as the source of inspiration for the film’s title). The film was historically accurate, as it relied on excerpts taken from historical records.

Anna married the master in 1721 after his first wife died a year earlier. Dutch harpsichordist and conductor Gustav Leonhardt, in his only performance as an actor, considered by most the best interpreter of Bach’s work in the modern era, dresses in a powdered wig and provides extracts from 25 pieces of Bach’s music that gloriously opens with him playing on the harpsichordist the Brandenburg Concert No. 5, Allegro 1 and includes such works as the St. Matthew Passion and the Goldberg Variations. It has a good mixture of concertos, oratorios and requiems to satisfy even the most demanding Bach devotee.

It’s an exhilarating cinema experience, as it clearly shows Anna’s devotion to her genius husband and details the mundane burdens placed on Bach as he tried to balance composing and career. It’s a rarely done pure musical treat of such a high caliber that also grandly gets at the Bach experience and his dealings with his aristocratic patrons. Almost the entire film is made up of live performances throughout Germany where Bach once performed, and for that alone the film is up there in the stratospheres. If that wasn’t enough, it lucidly allows us to observe the everyday world of the great composer and his dealings with his large family (13 children) and his blindness during his last days.

It rejects sentimentality and conventional storytelling in favor of making it a great listening experience, a hard-boiled minimalist love story and a modestly stylistic formal aesthetic film. I can’t think of a musical biopic I liked better or a film I valued more for its sublime beauty (shot in black-and-white). 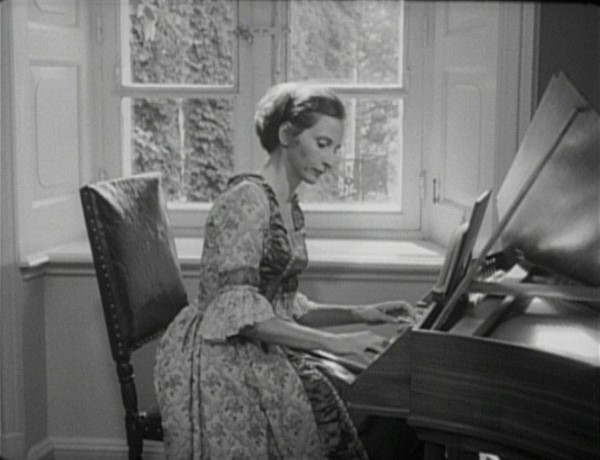