German emigre to Hollywood, Kurt Neumann (“Tarzan and the Amazons”/”Son of Ali Baba”/”She Devil”), directs this b/w shot dull so-so sci-fi film, that’s played straight-forward, is humorless and all the thespians are wooden. It’s based on the story by Irving Blockand the weak script is written byLawrence Louis Goldman.

The titled character isnamed for the evil monster Greek god Kronos–in this case is an all-metal “accumulator,”a robot standing over a hundred feet tall, sent to Earth by aliens (whose planet is depleted of energy sources) to suck up all its energy and thereby destroy the planet.

A trucker riding the nighttime deserted Arizona desert road encounters a bright sphere from an alien saucer.The possessed trucker heads to Lab Central, a restricted atomic energy government research outpost in the desert, and gains entry by knocking out the security guard with a blow to the head with his jack. The trucker breaks into the office of Dr. Hubbel Eliot (John Emery), the lab’s director, and zaps him with a ray to the scientist’s head that makes him a possessed man now working for the aliens. Then the trucker, no longer needed by the aliens, has a fatal heart attack.

In another part of Lab Central, scientist Les Gascal (Jeff Morrow) mentions to his nerdy colleague, computer whiz Arnie Culver (George O’Hanlon), that the asteroid he has been tracking is heading right for Earth. Notifying the Pentagon, the Air Force responds by firing missiles at it. Strangely, instead of destroying it, the asteroid only veers from its position and lands in the Pacific Ocean off the Mexican coast. During the missile attack, Eliot collapses and is hospitalized in Phoenix. There he’s treated for his stress with electric shock by psychologist Dr. Albert Stern (Morris Ankrum). The patient, while momentarily free of his possession due to the shock treatment, tells on tape of his strange dream of the asteroid coming to life under the sea and someone inside his head giving him orders to locate power sources and that there’s a metallic monster who entered the atmosphere through a huge transmitting tower to steal the Earth’s energy. When he becomes possessed again, Eliot goes bonkers and attacks the shrink for the tape and in fleeing the shrink is accidentally electrocuted.

Scientists Gascal and Culver, and the movie fan lab technician girlfriend of Gascal, Vera Hunter (Barbara Lawrence), go to Mexico to investigate the asteroid. When the metal monster is spotted in all its robotic glory (two upright cubes topped off by a dome and four legs at the base), Culver dubs it Kronos. When its evil purpose is learned and it continues to grow as it treks the countryside absorbing energy, it becomes up to smart scientist Gascal to put his untested scientific theory to work (reversing the polarity of the neutron flow) to see if his knowledge will kill the monster and save the earth for another day. 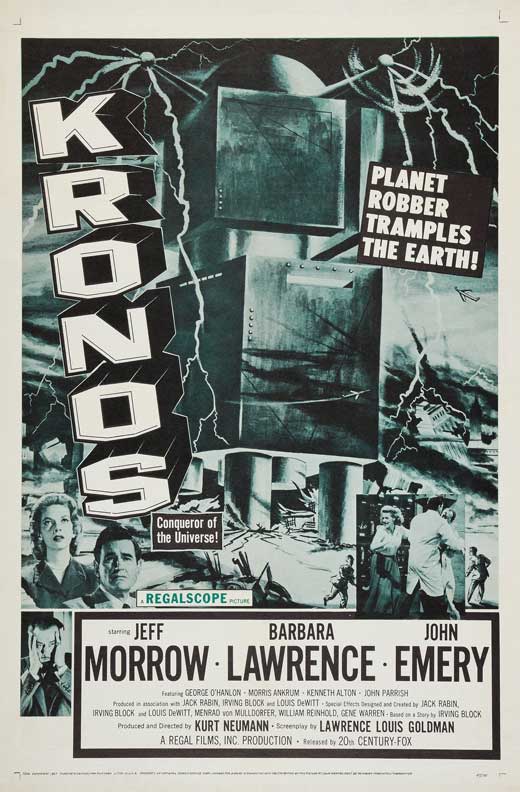