“A different kind of horror film.”

Grand Rapids based auteur Joel Potrykus (“Buzzard”/”Ape”) creates what may be called a different kind of horror film, one that explores the dregs of society and how the lines of reality and fantasy can be blurred when losing track of reality.

Sean (Ty Hickson) is a haunted angry young black adult who lives in isolation somewhere in the Michigan woods in a trailer, who is pursuing alchemy through amateur experiments. His only companion is his cat Kaspar. He has run away from a civilization he can’t adjust to, and from a book on magic turns to chemistry experiments and then to magic rituals to eventually summon the Devil. He tries black magic to try to discover a path to follow that will enrich him with gold. What ensues is a self-destructive course in self-mutilation and a futile fight to ward off his inner demons, as he eventually goes bonkers. His weird actions indicate he’s suffering from a mental illness, while also suffering from delusions of grandeur. This odd-ball loser is pathetic, funny and scary.

The loner’s only visitor is soul brother Cortez (Amari Cheatom), a possible blood relation. He’s a hipster street person, who comes irregularly from the city to partake in some snappy retorts with his bro and to deliver groceries and supplies for the lab work.

When alone, Sean limps around with a metal brace on one of his legs, does some ranting, fills himself with soda and Doritos, listens to a scratchy cassette recording of “Jingle Bells,” and in a magic ritual sacrifices a possum to the Devil.

Needless to say, this original but weirdly chilling underground film is not for everyone. 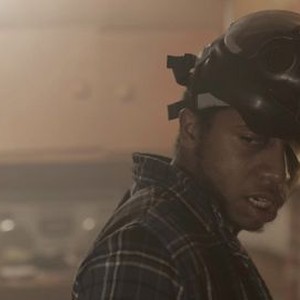