“I know for sure Knowing is an apocalyptic allegorical sci-fi film whose plot is absurd, even for a B-film sci-fier.”

I know for sure Knowing is an apocalyptic allegorical sci-fi film whose plot is absurd, even for a B-film sci-fier. Now that doesn’t always mean the ruin of a film, but when the plot becomes so shamelessly absurd that the viewer has no choice but to titter at its most serious moments and is prevented from emotionally getting involved in the story, then the film has a problem. It veers pretty close to the crackpot turf mapped out by M. Night Shyamalan in “Signs.” Director and cowriter Alex Proyas (“Dark City”/”I, Robot”/”The Crow”) can’t keep this well-crafted but hokum-filled film on a smooth track, as it draws to an ending that clears up the confusion by only adding more confusion. Director Proyas and star Nicolas Cage, playing it more subdued this time than his usual over-the-top bug-eyed mannered way, seem to be curiously on the same downward spiral in their careers after both had promising starts.

It’s shot mostly in Melbourne, Australia, and is based on a novel by Ryne Douglas Pearson, and written without distinction by a team of writers (the author, Juliet Snowden and Stiles White). The dialogue is the usual genre mush and the glum supernatural story about those with insider info on the doomsday scenario serves as the film’s hook.

Knowing follows brilliant MIT astrophysicist John Koestler (Nicolas Cage), who was recently widowed when his wife died in a hotel fire. John is estranged from his pastor father and his strong religious beliefs, as the non-believer in God believes life is random and not determined. Caleb (Chandler Canterbury) is the grief-stricken John’s nine-year-old very bright, precocious, hearing-impaired son, who is dearly loved and cared for by his dad and the reason he’s able to go on living without his beloved wife.

John attends a 50th-anniversary celebration at Caleb’s elementary school in Lexington, Mass, that unearths and opens a time capsule buried by the very first class in 1959 when the school opened. The class members of 2009 are each given a sealed envelope with the drawings made by the class of 1959 under the supervision of their teacher Miss Taylor (Danielle Carter), who were asked to draw something about what they think the future will be like. Those drawings were included in the time capsule. An elderly Miss Taylor (Alethea cq McGrath) is also at the ceremony, as Caleb draws the one drawing that contains only numbers neatly jotted down in rows that was made by the class weirdo, Lucinda (Lara Robinson). That night the professor while a bit tipsy figures out that the patterns spell out dates of major disasters and their death tolls of the past fifty years, and there are a few more numbers indicating future catastrophes. John tells his colleague what he’s come across, a cosmologist named Phil Beckman (Ben Mendelsohn), who warns him that numerology is not scientific. When soon a plane crash in John’s neck of the woods occurs at the exact location and date as predicted and also correctly gets the death toll right as written on Lucinda’s spreadsheet, the professor really believes he’s onto something and interviews Miss Taylor and tracks down the grown daughter of the deceased Lucinda, Diana (Rose Byrne). The divorcee has a daughter Abby (Robinson again) who is the same age as Caleb, and the two single parents after a rocky start become allies.

The mystery of the ominous numbers deepens with occasional sightings of the Stranger (D.G. Maloney), a threatening silent blond-haired figure, sometimes accompanied by other lookalikes. They stalk the boy at home, give him shiny black pebbles and whisper things in his ears.

When John figures out the exact time and place of the next forecast-ed catastrophe that spells out doomsday for the world, he figures out the safest place to take his Caleb and Diana’s Abby–who like Caleb hears the “whisperers.” Working solo, John tries to deal with why the number predictions end on October 2009 and what all this does to his once precious scientific theories.

Knowing is filled with cardboard characters, weak acting, a preposterous story, and is hamfisted. It unsuccessfully tries to mix the usual mainstream sci-fi doings with the more outrageous mystical loony theories, and ends up looking more dumb than smart or provocative. The result is an unintentionally funny film with plenty of chutzpah to put together such pseudoscience that has no time for real humor, romance, or charm, as it busies itself with getting all shook up over its special-effect driven fiery climactic Armageddon–as now both the religious and scientific extremists through the magical shtick of Hollywood can share the same ludicrous cornball vision of the “beyond.” The best thing I can say about such hokum, is that Cage deserves to be in it and Proyas deserves to be directing it. 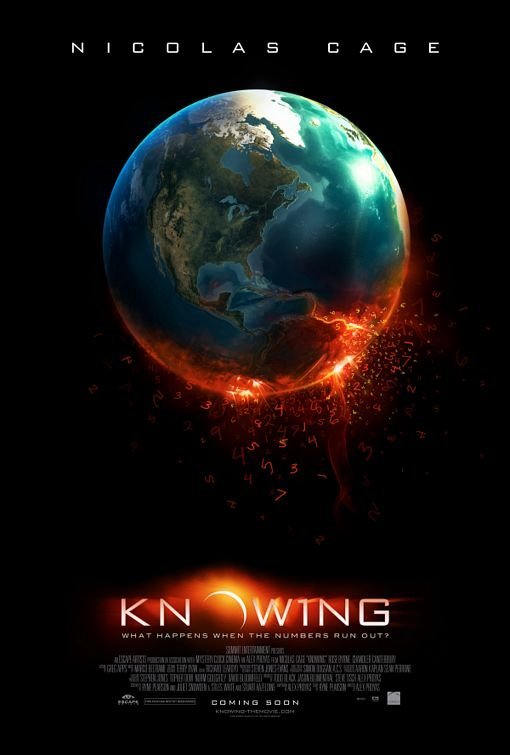