KISS THE BLOOD OFF MY HANDS

“The soap opera romance felt as phony as the London dock scenes.”

Norman Foster directs a romantic/crime melodrama that has a great title it can’t live up to. It’s a tepid film noir tale set in the rubble of London after WW11, that follows the travails of two opposites who fall in love. Burt Lancaster turned down the part of Stanley Kowalski in A Streetcar Named Desire to be in this film. His loss was Marlon Brando’s gain.

Bill Saunders (Burt Lancaster) is a bruiser born in Canada and raised in Detroit, who joined the navy to escape his troubled childhood. The embittered ex-POW is asked to leave a London pub at closing time and in a rage slugs the proprietor. This blow proves fatal, as the bartender hit his head on the floor. Bill escapes into the back streets and is chased by the police. He climbs through an open window in a boarding house and holds a kind-hearted nurse, Jane Wharton (Joan Fontaine), hostage all night. When he falls asleep, she fails to call the police or escape. In the morning she leaves for work in the clinic and he remains in her flat all day, but flees before she returns at night. To get some dough, Bill mugs a passer-by in the street.

But Bill can’t get Jane out of his mind, and sees her again when she visits the zoo. She believes him when he tells her that the killing was an accident and that he jumped ship because he feels tormented by his war experiences. Jane is a lonely widow, whose hubby died during the war. After a happy time together attending the horse races, on the train returning to London, he goes into a rage when he’s beaten in three card monte and viciously beats up the passenger (Lewis L. Russell). While running away from the crime scene he is stopped by a policeman, whom he punches out. For these crimes he receives a six month jail sentence and a lashing.

When he gets out of prison, Jane realizes she has fallen hopelessly in love with him and gets him a job in her clinic as a truck driver. Just when things are going well, a racketeer patron in the pub where the bar owner was killed, Harry Carter (Robert Newton), recognizes Bill and threatens to call the police unless he goes along with a heist of his truck’s medical drug supplies. Harry has worked a deal with a shady sea captain (Jay Novello) to put the valuable medicines on the black market. When the deal goes sour, Harry introduces himself to Jane as a friend of Bill’s and things take a turn for the worse.

It’s filmed by Russell Metty almost totally in the dark back streets of London, where a troubled Lancaster roams around as if he were a panther in a cage and tries to escape his miserable life in the love he feels for nice girl Fontaine. She’s a bleeding heart liberal, who has fallen in love with him despite her misgivings about his violent nature. In this ‘love is blind’ masochistic relationship melodrama, there are so many inconsistencies in the storytelling that the narrative collapses from disbelief. At the end of the day, the lovers play fast and loose with matters of morality and telling the truth. The soap opera romance felt as phony as the London dock scenes. 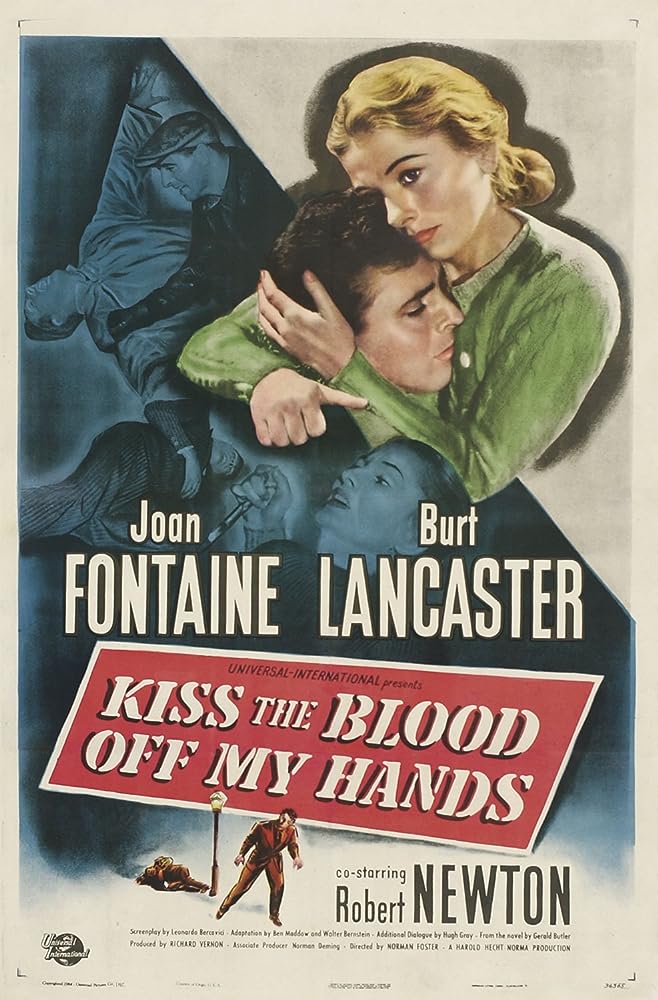