From director/writer Lisa Cholodenko of High Art (1998) comes another quirky social drama that has a good setup but never goes anywhere. It’s nice, but truthfully it never pulled me in.

The film’s title is derived from a street that runs through the middle of the Hollywood Hills and joins the middle-class inhabitants of the San Fernando Valley to the heart of the city of Los Angeles. This romantic/comedy/drama is set in the luxurious Laurel Canyon milieu. It touches on the free-spirited rock star lifestyle compared with the stuffy lifestyle of a medical professional conservative couple first starting out.

Both Sam (Christian Bale) and his live-in fiancée Alex (Kate Beckinsale) graduated from Harvard Medical School and return to Sam’s libertine fortysomething mom’s home in Laurel Canyon for him to begin a residency in psychiatry at Hausman Neuropsychiatric Institute, and for her to finish a dissertation on Drosophilia Genomics (the reproductive habits of fruit flies). Sam’s overprotective of Alex, and is concerned that she might not be comfortable working in his famous record producer mom’s house. Sam’s mother Jane (Frances McDormand) has changed plans to move into her Malibu beach house and has started an affair with hunky Ian (Alessandro Nivola), who is 16 years younger and is the lead singer of the British group she’s cutting an album with in her house. Sam is upset by this change of plans, since he planned on having the house without his mom around. He’s disappointed that his irresponsible mom didn’t tell him she gave the Malibu house to her ex-boyfriend as a parting gift.

The plot revolves around the clash over lifestyles. Tension builds as Sam and Alex begin to doubt if their perfect relationship is really ideal. What complicates matters is that an attractive second-year Israeli fellow resident (Natascha McElhone) has eyes for Sam, and the two find they have a lot in common. Meanwhile, Alex is intrigued by the rockers and joins them in the recording studio and in partying. Alex is tempted by both Jane and Ian, and is confused by their attention. Her quiet scholarly world never prepared her to deal with these two loose cannons. All sorts of surprises take place, and it leads to a rather dramatic but fuzzy ending. The ending puzzled me, as it came out of the blue and didn’t make sense. The story didn’t seem to be going there.

The performances were sharp, even though the characters weren’t fleshed out and their dark sides materialize without rhyme or reason. Frances McDormand is a treat, her character remained true to herself and the best developed one in the story. Her eyes are always dancing with joy or looking out with wonder. I also enjoyed Alessandro Nivola’s nuanced performance, he got the rocker spirit down to a tee. While Bale and Beckinsale were convincing as an uptight couple struggling with their repressed inner desires. I just don’t know where it all led, except taking us for a ride through a celebrated upscale bohemian neighborhood I would most probably never see from inside their gates if it wasn’t for the film. Maybe that’s good enough, but I’ll have to think about that for awhile. 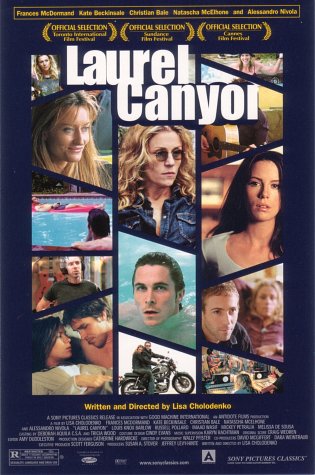