Kiss of Life marks the feature-film debut for director-writer Emily Young (“Second Hand”–a short), a graduate of Poland’s Lodz film school, who tries her hand at a thoughtful and ambitious arthouse melodrama. It’s about a UN aid worker, John (Peter Mullan), stationed somewhere in Eastern Europe, who journeys home for his wife’s birthday celebration in three days. He daringly travels in war-torn territory controlled by Kalashnikov-carrying ‘men in uniform.’ John aims to reunite with his harried wife, Helen (Ingeborga Dapkunaite, a Lithuanian-born actress living in London–she replaced the great Katrin Cartlidge who died just before filming), who resides in London with their two spoiled children, the boy-crazy glowering teenager Kate (Millie Findlay) and the bratty adolescent Telly (James E. Martin), and her dotty father Pap (David Warner). After dropping the boy off in school, Helen is killed by a speeding car. The truant boy witnessed the car accident, but instinctively ran away out of fright. John makes his way home through the ruins of the former Yugoslavia not knowing his wife has died. The film’s point is to relate the family’s tragedy to the Bosnian war, as the action goes back and forth between the upset London family dealing with the loss of mom and the burdened John trying to reach the safety of the border in realization that his family is falling apart without his presence.

It’s a promising premise that awkwardly mishandles the importance of a loving family relationship in its fantasy scenes of the present and dreamlike flashbacks, making it all too cliché-ridden. It does better in capturing the harshness of living in a war-zone (it was shot in Croatia and Bosnia–giving it an authentic look but never establishing which war-zone it was covering), but is too understated to be politically relevant like Krzysztof Kieslowski’s No End (1985).

The promising theme is never satisfactorily realized politically or artistically. It’s an interesting failure, showing that Ms. Young has talent but got too arty for her own good. Helen’s anxieties are continued after her death, as she’s left in a state of limbo looking in on her troubled family and waiting for the return of her beloved hubby. Those scenes were shot with her resembling a ghost-like figure and subconsciously after death trying to do what she couldn’t accomplish in her life–to reunite her family. The couple’s failed relationship despite their love for each other is blamed on his emotional withdrawal from the family and his frequent absences due to his work, and her inability to function without him in the house. Mullen does his usual good acting job, displaying a frustratingly haunted look throughout as someone who wants to do the right thing but realizes it’s not that simple. Dapkunaite’s performance captured all the intensity of her flawed but angelic-like character, as we couldn’t help but feel pity for her despite her inability to handle the children by herself. The film’s biggest weakness was that it lacked a suitably drawn-out story for a full-length feature, and though only 86 minutes it seemed a lot longer. 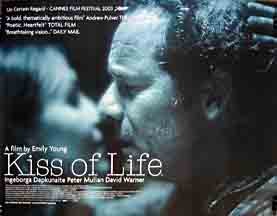 LADY IS WILLING, THE