“Whatever ambitions this romantic comedy might have had, they were never realized.”

An overlong, unfunny, cynical, crude and tasteless bedroom farce by the renowned team of director Billy Wilder and I.A.L. Diamond (“Some Like It Hot”/”The Apartment”) that caused protests on its release from the Catholic Legion of Decency for promoting adultery, the Moral Majority said it was smutty, American mainstream viewers rejected it for being so vulgar and cruel to those country bumpkins who live in the sticks, most critics hated it and many movie theater owners refused to run it. Wilder defended it by saying it was meant to point out the sanctity of marriage. I wish I could have enjoyed it better, but though I disagree with all those groups in their objections I nevertheless failed to find it charming or witty or see it as anything but a cynically joyless attempt at comedy.

Dino (Dean Martin) is a world famous crooner who is also a boozer and a notorious playboy (he gets migraines if he doesn’t have a different woman every night), who after his Las Vegas gig at the Sands is returning in his fancy Ghia convertible to Los Angeles and passes through the one-horse-town of Climax, Nevada. When filling up on gas, the deceitful gas station owner Barney (Cliff Osmond) decides to keep the crooner in town overnight by disconnecting his fuel line so he and his amateur songwriting partner Orville Spooner (Ray Walston, took the place of Peter Sellers who had a heart attack) could sell the star their ditties by serenading him (the songs are by Ira Gershwin). They get Dino to stay in piano teacher Orville’s house, but the insanely jealous Orville gets the jitters having the womanizer near his pretty wife Zelda (Felicia Farr), a former president in high school of Dino’s fan club, so they hire as bait for $25 from the town’s one naughty spot, “The Belly Button,” the tart cocktail waitress with the heart of gold, Polly the Pistol (Kim Novak), to pose as Orville’s wife. To do this Orville picks a fight on their wedding anniversary night and his distraught wife goes home to her parents. Things go awry when during the role playing, the unctuous Orville begins to think the hooker is his wife and in a fit of jealousy gives Dino the boot. It ends up having Orville sleep at home with Polly, while Dino finds his way to Polly’s trailer where he runs into Zelda. She returns home after escaping from the barbs of her overbearing mother.

The comedy consisting of bad jokes (including toilet and lame sexual jokes) never works and the so-called bawdy story seems pretty tame by today’s standards, and never gets to be more interesting than the usual dull fare of many of today’s TV sitcoms. It draws heavily on Martin doing a self-parody (which he’s pretty good at it). But the satire on greed, the terrible American landscape and lust falls flat; it’s never amusing and certainly not offering much of a moral lesson. Whatever ambitions this romantic comedy might have had, they were never realized.

The black and white film comes with two endings (changing the trailer scene with Martin and Farr to leave doubt if they slept together). I saw the original version from its European release. 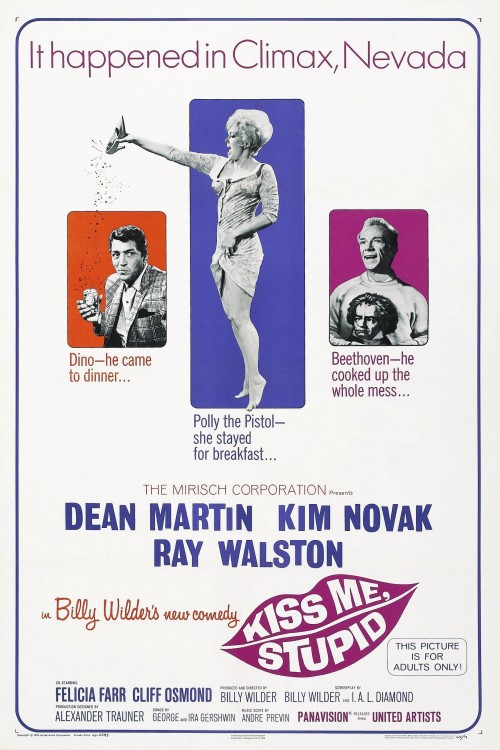