The first of three talkie versions of H. Rider Haggard’s 1886 adventure novel King Solomon’s Mine (other lesser versions are in 1950 and 1985). This version offers a witty script by Charles Bennett, Michael Hogan, Roland Pertwee, A.R. Rawlinson and Ralph Spence. Director Robert Stevenson (“Mary Poppins”/”Herbie Rides Again”/”The AbsentMinded Professor”) keeps it lively with engaging battles between warring native tribes, a climactic erupting volcano with bubbling lava, and some ethnographic musical sequences. Though Paul Robeson is blessed with a rich baritone voice, his corny songs accompanied by a full orchestra repeatedly stop the flow of the story.

Irish girl Kathy O’Brien (Anna Lee) follows her fortune hunter father, Patrick O’Brien (Arthur Sinclair), to deepest Africa, who went there in search of the mythical King Solomon’s mines that’s supposedly filled with diamonds. Kathy hires the British explorers, led by Allan Quartermaine (Cedric Hardwicke), to search for her missing dad, with Umbopa (Paul Robeson), a noble native porter, as their loyal guide across the wilderness. When the search party falls into the hands of hostile natives, Umbopa tells them he’s their usurped king. An eclipse of the sun allows the white hunters and Umbopa to escape. Later a big battle develops between the hostiles and Umbopa’s followers, who are joined by the white hunters. Umbopa wins the battle and is crowned the new king. Meanwhile Kathy finds her dad alive in the mythical mine and the white hunters follow her into it, as a volcano erupts trapping them inside. Umbopa rescues them, in the nick of time, by finding a way out. 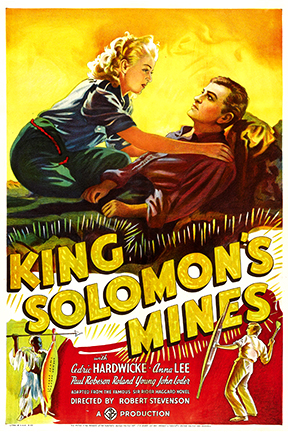