“Most brilliant and original film.”

It was titled in Germany as Im Lauf der Zeit; the American version is called Kings of the Road. It’s perhaps Wim Wenders (“Until the End of the World”/”The American Friend”/”Wings of Desire”) most brilliant and original film, at least it’s the one I most admire. It’s a beautifully realized aimless road movie reflecting on the ordinary German’s postwar reactions, offering observations of many different kinds of subjects in its leisurely pace (including the decline of the German film industry and the breakdown of society) and it takes a stand on the Yanks ‘colonizing’ the European subconscious (a comment made by one of their German friends). It’s only fault is that it takes three hours to get where it’s going in its week long trek and hits some tedious bumpy spots on the road.

Robert (Hanns Zischler), a disillusioned and suicidal pediatrician running away from his Genoa family after his marriage just broke up, crashes his Volkswagen Beetle into the river where Bruno (Rüdiger Vogler) is parked on the bank in his pantechnicon truck. Bruno is an itinerant film projector mechanic servicing the vanishing breed of rural cinemas along the east-west German border. He offers Robert a ride.

It’s in black-and-white; there’s American rock music in the background; the landscape is eerily barren; borders are used metaphorically to indicate the closing off of different views; the men converse with old-time projectionists who give their two cents about the state of cinema; the men form an easy-going buddy-buddy relationship that has them silent for long periods until finally introducing themselves and talking about the past and their present fears, but nevertheless they remain enigmatic; and if you have the patience to sit through it, it’s one of the great films about men searching for their identities without women entering the picture. It’s done without contrivances and feels emotionally right, as in the end the men go their separate ways to live their own lives but maybe with a better understanding of someone else. Certainly not for all, but for those who take to it there’s the reward of experiencing something unique and special. 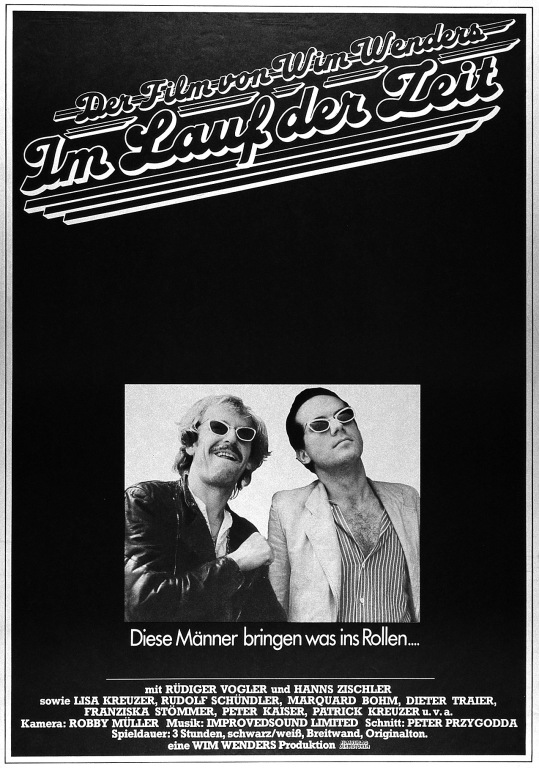