THE BALLAD OF GENESIS AND LADY JAYE

An intimate, visually stunning (uses a handheld Bolex 16mm camera) and observant but overwrought emotional portrait on an intense love affair between fringe characters that is very human, if not also a bit strained for those not channeling punk-rock artists. French-born NYC based director Marie Losierfollows this non-traditional love story for seven years to film this experimental personal documentary, one that plays to the fans of the innovative performance artists but might not appeal to a wider audience.

The British-born Genesis P-Orridge is the founder of avant-garde bands the Throbbing Gristle (in the 1970s) and Psychic TV (G’s current band). Both bands are pioneers in industrial music. Genesis narrates and tells of going from a man to a woman, and meeting and marrying in the early 1990s the love of her/his life–the much younger dominatrix New Yorker called Lady Jaye. The gist of the film depicts their blissful tender relationship, their playful home life, their artistic achievements and world band tour together with Psychic TV. Both performers promotedPandrogeny.This involved plastic surgery that made the couple look alike; Genesis even got breast implants.

By use of home movies and archival footage, the bands’ music, extensive interviews with Genesis and with Lady Jaye, before she suddenly died in 2007, and how both anti-establishment iconic artists William Burroughs and Brion Gysin were helpful in Genesis’s intellectual development as she/him used their arty cut-up techniques. The pic adoringly, with no critique, tells in a most sympathetic way this heartfelt love story about non-conformist artists living their life as art and who brazenly challenge the public’s familiar notions of love. 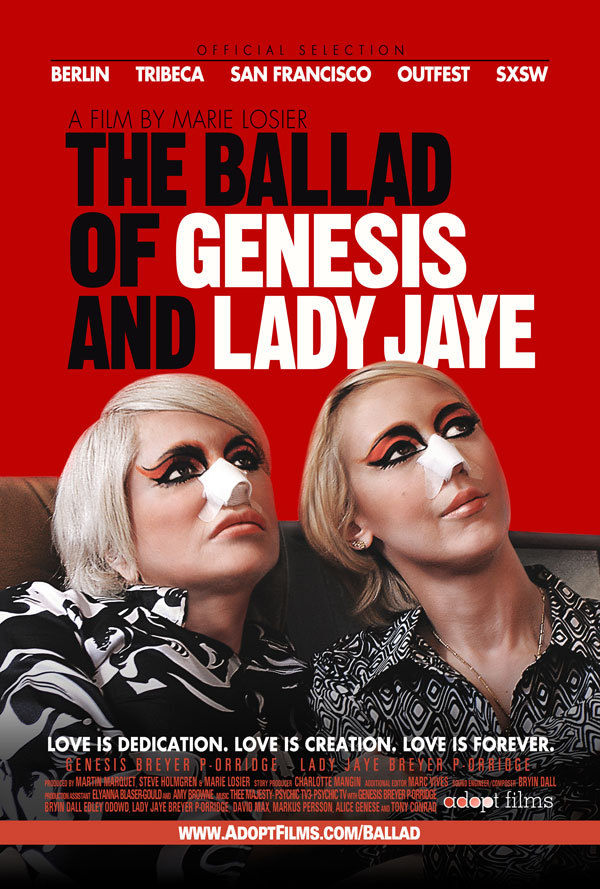