KING OF MARVIN GARDENS, THE

“Irresistible. It was a bitterly odd pic that offered an Atlantic City scenario that had no saltwater taffy to sweeten the taste.“

An irresistible morality study about brothers trying to connect even though they are opposites and have lost touch with each other over the years. The title is derived from the Monopoly game, as the film is set in the same Atlantic City that provided the original street names for the game board. Director Bob Rafelson’s intriguing but dreary drama about one’s sense of reality and dreams, is scripted by Jacob Brackman and is colorfully photographed by Laszlo Kovacs. The cinematographer captures the decaying offseason wintry desolate boardwalk scene and the crumbling buildings in the city. On the boardwalk there is still the appearance of luxury through the once grand hotels that have seen their better days but are now in decline. “King” passed under the radar as far as being recognized for its unusual way of mixing reality and dreams. Though flawed with too much idle chatter, it nevertheless is one of the better films of the 1970s. Its haunting visions of the dreamy Bruce Dern character, whose life is played out as a Monopoly game to win, is juxtaposed against the bleak reality of the Atlantic City setting. It is hard to get those visionary scenes out of one’s mind. The shocking tragic ending, also, puts a bold exclamation mark on the story and on a distorted version of the American Dream gone sour.

David Staebler (Nicholson) is a late night FM radio talk-show host in Philadelphia, fond of telling personal (he is not always factually correct) and philosophical stories. The introverted David lives with his elderly grandfather and suffers from depression, which caused a stay in a rest home. After not hearing from his carefree living older brother Jason (Dern) for some time, he receives an urgent call to get down to Atlantic City immediately because he has something cooking–a huge real estate deal in Hawaii he’s set to close which will make them rich.

At the train station in Atlantic City, David is met by an aging beauty dressed like a beauty queen, Sally (Burstyn), and a ragtag brass band serenading him while off key. She announces herself as Jason’s squeeze, and the cynical David soon learns that his brother couldn’t meet him because he’s in jail facing a trumped up felony auto theft charge that carries a 2 to 5 year sentence. Jason requests that David visit his business associate Lewis (Scatman Crothers) to get him bailed out. But David leaves without making contact, as he is made to feel uncomfortable as Lewis ignores him and the place is filled with scary black criminal types. But somehow Jason gets out on bail and meets David on the boardwalk, like he said he would. Also, with him is a young and pretty blonde named Jessica (Robinson). Her stepmother is Sally, and these two knockabouts have pinned all their hopes on the fast-talking schemer Jason to make good on his get-rich-quick-scheme to get the Japanese to invest on the Hawaiian island without Lewis’ blessing.

On the empty beachfront setting the brothers share their dreams and loves and disappointments, as David has chosen to withdraw from reality and relieve his suffering by living his life in a hermetic artistic funk. The amoral and extroverted Jason, on the other hand is full of vinegar, and is relying solely on his latest scheme to reach an island paradise. There’s one glorious visually striking scene with the brothers on horseback on the beach, with Jason on a white stallion while his brother is on a dark horse.

As reality begins to sink in that Jason is a hopeless dreamer and despite his big talk serves merely as an errand boy for Lewis’s black crime ring, it becomes clear that he has little chance of making his scheme work. Also, things become more exasperated when Lewis will not get Jason’s charges dropped and Jason drives Sally insanely jealous as he dumps her for the younger Jessica. David is impotent to prevent the tragedy that these miscalculated dreams by the brash Jason bring on.

There are three finely tuned performances from an emotionally penetrating sedate one by Nicholson, Dern’s fiery one, and Burstyn’s explosively demanding one. The four main characters witness their relationship becoming strained by their far reaching and unrealistic dreams, as they puzzle over their life and loves and can’t get out of the traps they have fallen into.

Irresistible. It was a bitterly odd pic that offered an Atlantic City scenario that had no saltwater taffy to sweeten the taste. 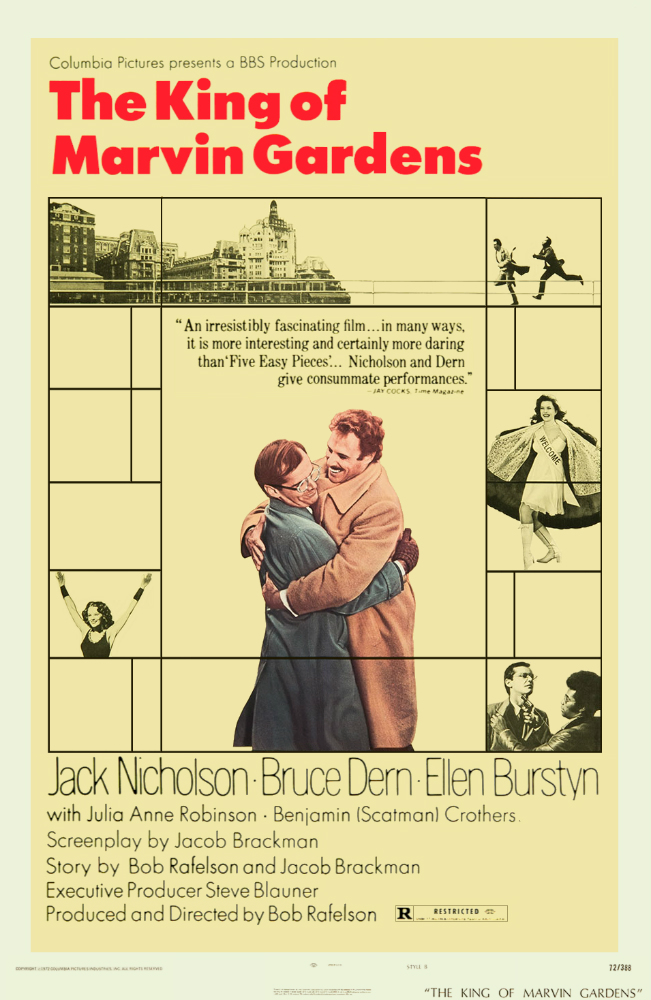