IF IT’S TUESDAY, THIS MUST BE BELGIUM

A slight but amusing ‘ugly American’ tour group comedy inspired by a 1957 New Yorker cartoon. Mel Stuart (“The White Lions”/”Four Days in November”) does a fine job handling the observant premise about crude tourists and in the process giving the clueless Americans featured a gentle ribbing for being so narrow minded. It’s based on the story and screenplay by David Shaw.

Charlie Cartwright (Ian McShane) is the womanizing London-based Brit tour guide who leads a group of about 18 Americans on a whirlwind tour by bus of several major European countries in 18 days. The diverse travelers include the attractive but square department store dress wear buyer from Minneapolis, Samantha Perkins (Suzanne Pleshette), who travels alone when she can’t decide if she should accept a marriage proposal from a hometown boy and needs time away from home to think about it. She turns down the tour guide Romeo’s passes until she weakens when visiting their last country. Jack (Michael Constantine) is a World War II veteran who recalls his war experience in Italy were his happiest days and wishes to relive his memories. Harve and Irma Blakely (Norman Fell & Reva Rose) are a goofy couple, who get separated when Irma mistakenly joins a Japanese tour. Uptight Fred Ferguson (Murray Hamilton) rails against his wife (Peggy Cass) for bringing him on the tour and watches closely over his frustrated teenage daughter (Hilarie Thompson). Harry Dix (Aubrey Morris) is on a mission to steal all the souvenirs he can from the hotels and spots visited. John Marino (Sandy Baron) is fearful of visiting his cousin in Rome, after a dreadful experience with a relative in Venice where he must jump into the river to escape a forced marriage. Bert (Marty Ingels) is into taking pictures of beautiful women he never met to send back home to impress everyone of what a wonderful time he’s having by telling them those are his conquests. 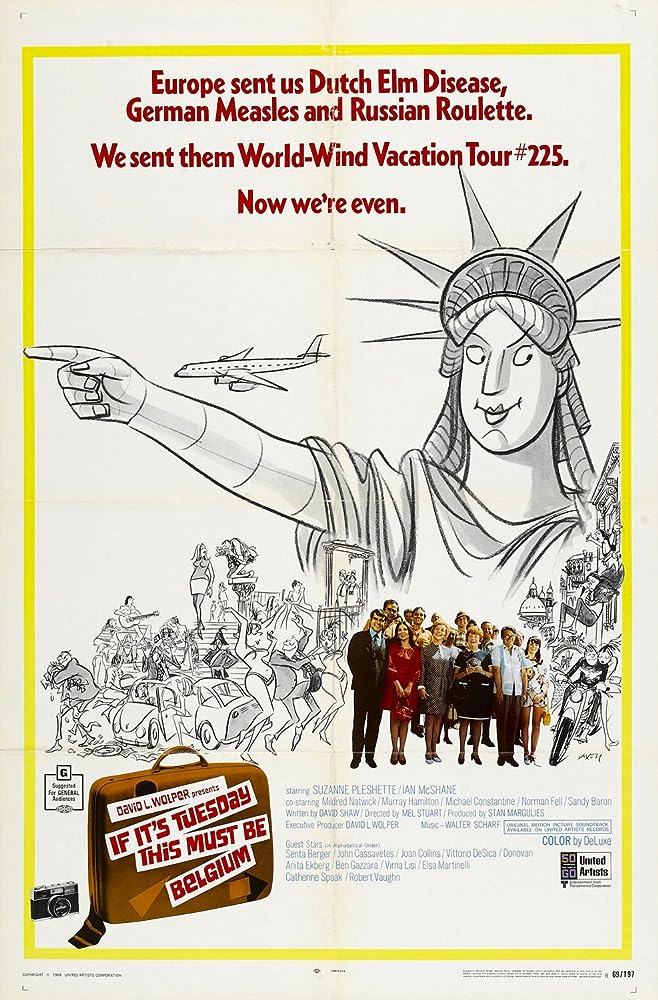