KING OF COMEDY, THE

Director Martin Scorsese’s (“Kundun”/”Mean Streets”/”Taxi Driver”) edgy black comedy on showbiz fringe people, groupies, autograph hunters and those obsessively caught up in celebrity fervor. It’s pungently written by Paul D. Zimmerman, who keeps it creepy, frighteningly funny and brilliant as cultural satire. It also pays homage to Jerry Lewis, who costars and shuns his infantile nerdy shtick to play a demanding grown-up role in a subdued manner as a star comedian under duress from his out-of-control manic fans.

Jerry plays the role of Jerry Langford, a Johnny Carson-like late night TV host who is very popular and after each show before reaching his limo must pass by a throng of enthusiastic fans waiting to catch a glimpse of him or to hound him for an autograph. One of those at the studio door every evening is aspiring comedian Rupert Pupkin (Robert De Niro), a pushy motor-mouth 34-year-old messenger in Manhattan, who lives in his parents’ home in Clifton, N.J., and in the basement has set-up an imitation set from Jerry’s Late Show to practice his stand-up comedy routines. Rupert’s dream is to appear on Jerry’s show, and he’s now ready for his big break.

One evening, fellow groupie Masha (Sandra Bernhard) forces her way into Jerry’s limo and is removed after trying to kiss him. Rupert clears the crowd from the limo and pushes his way into Jerry’s limo and won’t leave until he gets Jerry to promise him an audition. After numerous attempts to reach Jerry at the studio fail and then being bounced from the studio after he sneaks in, Rupert gets tossed again after dragging the girl he had a crush on in high school, Rita (Diahnne Abbott), now a barmaid he just met again, for an unscheduled visit to Jerry’s posh suburban home. Rupert is willing to do anything to be a comedian, and arranges with fellow loony groupie Masha to kidnap Jerry and force his people to put Rupert on the show billed as “The King of Comedy.”

This is Taxi Driver without the cab or the Viet Nam War angst, but with the same oddball type of anti-social character willing to do anything (even if criminal) to make his dream come true. The repulsive character De Niro plays is driven by a quiet rage that will allow no one to stop him from making his dream come true, even if his journey takes him on a ride on the dark side.

De Niro and Lewis give masterful performances, while improv commedienne Bernhard is right at home with the bizarre storyline that is filled with unsettling moments. 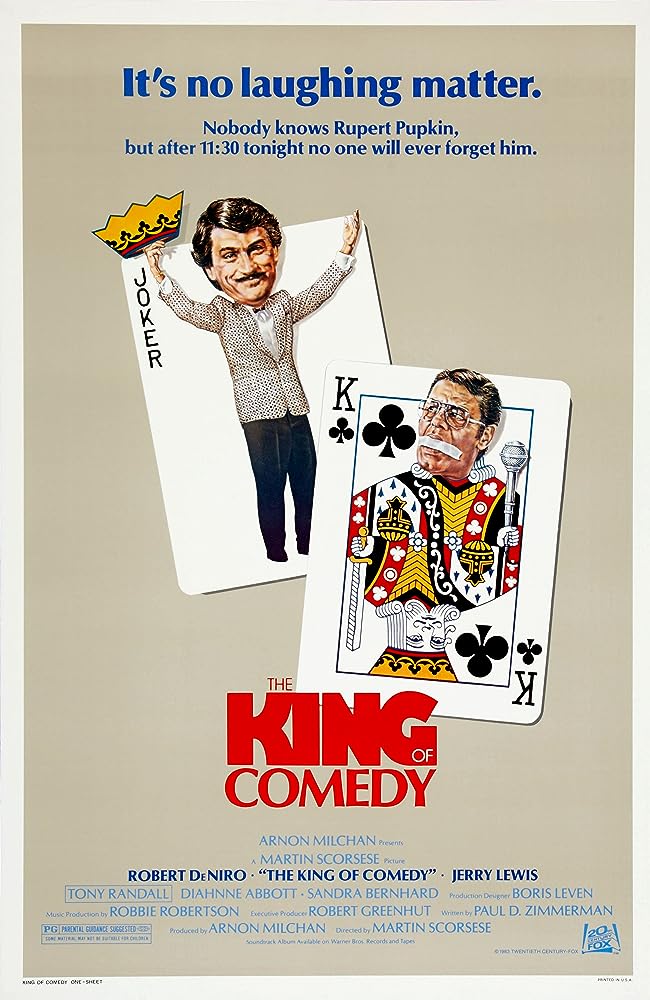