An overstuffed remake of the 100 minute 1933 classic co-directed by worldly adventurers Merian C. Cooper and Ernest B. Schoedsack; it’s a cheesy low-budget gimmicky Depression-era film that saved RKO from possible bankruptcy and a film I enjoyed for what it was but never thought of it as a work of art or that it should be taken seriously. New Zealander Peter Jackson of the Lord of the Rings trilogy fame, obviously thinks otherwise and forges ahead with this $200 million budgeted splashy eye-popping special effects extravaganza that mixes schlock and art (shamelessly alluding many times to Joseph Conrad’s “Heart of Darkness,” when the two sea stories couldn’t be farther apart), and a hokey love story between a young woman so desperate for protection in the cruel world that she falls for a 50-foot gorilla. None of the attempts to give the slim narrative depth and emotion works, as it has to settle for a theme-park horror story joy ride adventure that sterilizes all the original’s sexual titillation, blatant racism, imperialism and funky mayhem into a crowd-pleasing feast of gorgeous visions and simple-minded moralizing about not judging a book by its cover (even a monster can be a sweetie pie if he falls in love with the right gal). It’s written by Jackson and his usual collaborators Fran Walsh and Philippa Boyens. Jackson has said this is his favorite movie ever and he proves that by the reverence he shows to the original by keeping the narrative unchanged as to content (updating its more blatant prejudices with more modern-day stances). The filmmaker makes this once again an adventure tale suggesting the fairy tale motif about the Beauty (civilization) killing the Beast (The Third World), meaning that beauty is both a good and bad thing in the development of the savage. But Jackson takes it all too seriously as pop culture fodder and makes it into an overlong tedious 187 minute CGI spectacle that smacks of self-importance and showbiz hustle P.T. Barnum style.

It’s set in the early 1930s in the Big Apple, and opens with a glimmering eye-catching 1930s Art Deco look showing a Hooverville encampment scene in Central Park, soup kitchens, welfare lines and a Times Square area jammed with yellow taxis and Modet T’s. It switches to vaudeville performer Ann Darrow (Naomi Watts) doing her comical hoofer number to an appreciative but almost empty house; the show closes after this performance and the hoofer is desperately seeking work as a legit actress, refusing to cash in on her looks and play burlesque. Out of desperation the stranded and starving alone young woman lands a weird gig from sleazy con artist filmmaker Carl Denham (Jack Black), whose lead actress just quit and the small framed Ann is hired mostly because she fits into the former star’s costumes and seems game enough to be used as “monster bait.” The part requires shipping out on the sly on a rusty tramp steamer helmed by shady Captain Englehorn (Thomas Kretschmann) and going to an uncharted mysterious place called Skull Island, where rumor has it there are prehistoric monsters. Carl schemes to not only shoot a so-called artistic movie but become rich by bringing back the Eighth Wonder of the World and selling tickets to see the attraction. The slimeball producer wants to have it both ways, be known as an artist and a successful businessman. At one point he tells his hesitant young actress: “I’m someone you can trust. I’m a movie producer!” Since screenwriter Jack Driscoll (Adrien Brody) didn’t finish the screenplay for the movie, Carl resorts to being his usual devious self and tricks him into going on the expedition and finishing the script. It takes about an hour of dull movie time to reach this prehistoric spot (a sort of base Jurassic Park lookalike) and find it’s occupied by skeletons, dinosaurs, bats, giant scorpions, all sorts of creepy insects, witches and zombie-like natives. The natives bring the blonde Ann to King Kong to be the one sacrificed in a jungle ritual, and the men on the boat do battle with the giant gorilla to save the white woman. In the battle seventeen of them die but lover boy Jack heroically comes to the rescue of the damsel in distress. Andy Serkis has a double role as Lumpy, the ship’s cook, and King Kong. As Kong he falls in love with the babe because she entertains him while doing her vaudeville routine and he becomes anthropomorphic so he can look into his heart and see the real gorilla in him needs a woman’s love and not a bundle of money or a killing field. It was that kind of a love story that shoots for romantic normalcy and shuns the censored kinkiness of the original (a humanistic sentimentality which should also help the b.o.).

After Jack’s daring rescue of Ann on Skull Island the showbiz folks return to a wintry but richer looking Manhattan, as the chained gorilla escapes from the crass tom-tom act in front of the fat cat New Yorker theater goers and meets again with the monkey loving Ann in the deserted midtown street he just wreaked havoc on. Central Park is smartly decorated with Christmas trees as Kong takes his woman for a turn on the ice before heading to the top of the Empire State Building and his showdown with the WWI flyers who will gun him down.

All the fuss seems to be about the grand special effects that include an overload of computer-generated images, such as Kong taking on three dinos at a time. It’s a love letter Jackson sends to Hollywood for providing such escapist entertainment so people have a chance to escape their real-world woes and the sensitive performance by Watts, who shows she’s a good screamer, can fake love scenes with the best of Hollywood’s starlets and has a photogenic expressive face that mops up the screen with star quality while more than adequately playing the role Fay Wray made famous. Watts wears her sincerity as if it were a Medal of Honor pinned to her slip’s straps. If there’s one thing that is clear to me, it’s that even though this stunningly gorgeous and well-crafted film comes so beautifully gift wrapped, when one opens the package there’s not a lyrical thing about this sappy adventure tale to savor: it’s mostly a goofy, sometimes witty, anything is possible in movieland, period film of continuous action and inconsequential words despite all the hype that it’s the best monkey pic ever and a throwback to a time when Hollywood knew how to make films that the public considered awesome. 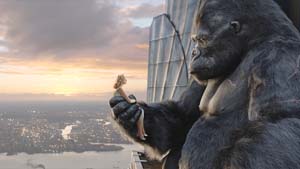