“Simply put, this is one of the best crime films ever made.”

Simply put, this is one of the best crime films ever made. Especially considering that it was made on a budget of only $230,000. It most closely resembles in style and scope the work of the great French directors Jean-Pierre Melville and Jacques Becker. It is a classic noir tale depicting man’s foibles of greed and betrayal. The killing here refers to a heist of the racetrack for a sum of $2 million as planned by ex-con Johnny Clay (Sterling), who rounds up a crew of mostly nonprofessional criminals. He wants to make one big score before retiring. The robbery itself is told in multiple-flashback style as each character gets a chance to tell his version of the story. It is done in parts so that each character’s story is not only told but the film is able to jump back and forth in time, allowing for several events to happen together.

The cuckolded George Peatty (Elisha) is a race track betting window cashier; Mike O’Reilly (Joe Sawyer) is a racetrack bartender with a sick wife; Randy (Corsia) is a corrupt cop; Marvin Unger (Flippen) is the one bankrolling the job; Nikki Arane (Carey) is the memorable psychotic marksman hired for $2,500 to kill a racehorse; Maurice (Kola) is a chess playing strongman, who for $5,000 will cause a fight at the track and thereby create a necessary disturbance calling for lots of police. Each one’s job is a key one in helping Johnny gain entry to the office where the money is kept. If they don’t work in coordination with each other, the plan wouldn’t work.

The complications to this well-planned scheme come through George’s sexy wife Sherry, the femme fatale, who is seeing a petty gangster behind George’s back, Val (Vince). She is shrewdly able to sneak the details of the robbery out of her dim husband, whom she detests as much as he worships her. She also clearly had the two best lines in the film: “If people didn’t have headaches, what would happen to the aspirin industry?” When George kills her after she betrays him, she is able to say right before keeling over: “This is a bad joke without a punch line.”

When Nikki kills the racehorse, he is immediately shot by the police. The rest of the robbery goes smoothly but when Johnny returns to pay off the boys, Sherry’s two henchmen who got there first kill everyone except for George. But he kills them and then goes back to his place to kill Sherry; he will subsequently die from his wounds. Meanwhile, Johnny and his girlfriend get unlucky at the airport, as their suitcase full of money opens up and scatters all over the airport. As Johnny is taken into custody at the airport terminal by a pair of detectives, he is too weary to make a run for it.

What makes this film so tense and gripping, is the exacting details that went into making this caper work. It is seen through the eyes of the odd mixture of characters who commit the robbery. Each one drooling for their share of the easy money, unconcerned that they have become blind about their criminal act. This is a theme that Kubrick will return to many times in his long career in films, that their perfect robbery fails because of the human condition they couldn’t control and not because the robbery wasn’t perfectly executed.

The main protagonist shows that he is capable of loyalty and love and of possibly leading a virtuous life, but whose downfall comes about when he can’t stop being a criminal to gain the something he can’t find inside his true nature. It fits in with Kubrick’s notion of life: that it is vital for one to see how the pieces are played out on the chessboard and how the player who does not always have the best strategy or execution can still win by learning how to persevere and change as the game does. As one of Kubrick’s early features it, nevertheless, remains one of his greatest films even without the added visual dimensions he was to pour into his later high-budget, more complex movies. The outstanding cast made everything look natural, and the gritty realism of the story was only enhanced by the glorious b/w cinematography. 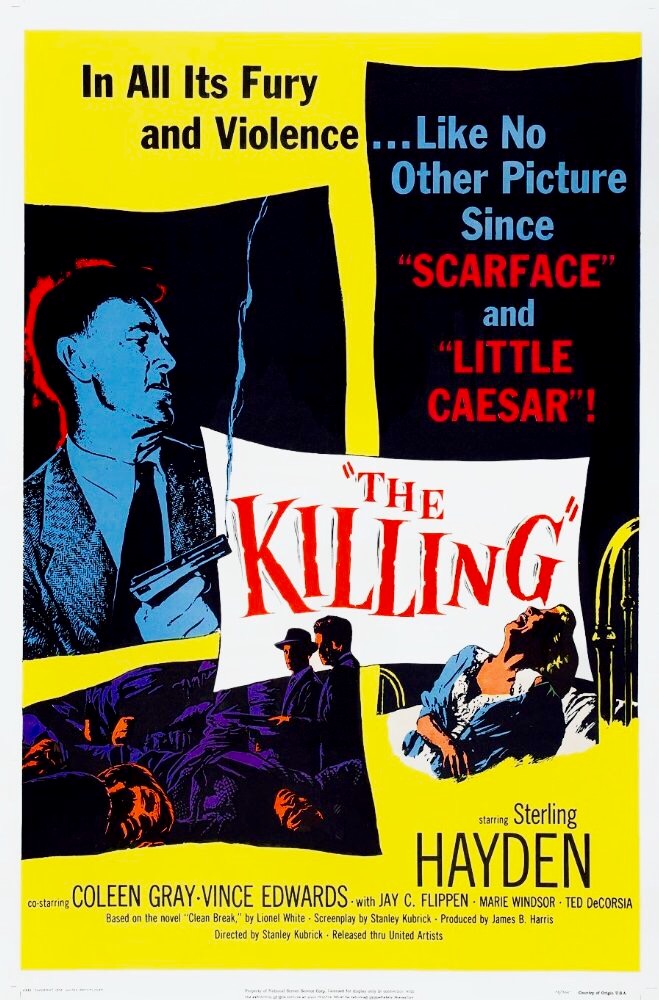