A quintessential noir film, more entertaining and atmospheric than essential viewing, featuring a hard-boiled story which examines why the main character who gets killed in the first reel– lost interest in living anymore. All the cliché noir characters pop up here including the femme fatale, the innocent man who is corrupted, and the calculating big-time crime boss and the cold-blooded hitmen. There is also the recognizable cinematography of this genre which is darkly shot, using shadows to frame its shots, long close-ups to show fear and to overall create a mood for what has become known as the noir world.

“The Killers” is adapted from Ernest Hemingway’s short story. The story is about the senseless execution of an ex-boxer called Swede (Lancaster-in his film debut). The wonderfully engaging opening scene sets the stage for the dark story that unfolds, as the hardened hitmen, Al (McGraw) and Max (Conrad), drive into a small New Jersey town and enter a diner during the supper hour. They are not too subtle about what they are after as they intimidate the diner manager, the cook, and a customer (Brown), while asking about Swede (he’s using an alias). They even tell the diner patrons that they plan to shoot him.

By coincidence, it turns out that there is a diner patron there who works in the same filling station as the Swede and knows the rooming house where he lives. He rushes to warn him of the danger. But Swede tells him there is nothing to do. He then asks, “Why do they want to kill you?”And Swede, while lying in bed in a darkened room replies, “I did something wrong… once.” The actual killing is anti-climactic, as the killers enter his room blasting away without saying a word.

Riordan (O’Brien) is an insurance investigator who finds this routine case curious because he doesn’t understand why Swede did nothing in his defense and becomes obsessed with the case, very much in the cliché of how a 1940s noir protagonist would react. And even though his company has to pay off only a small amount on the life insurance policy, he decides to fully investigate it.

Riordan figures out from Swede’s bruised knuckles that he was an ex-fighter and finds out that he came from Philly. But first he goes to Atlantic City and meets the chambermaid Queenie in a hotel Swede stayed in. She is the sole beneficiary of the Swede’s insurance policy and tells Riordan she only met him once, when he stayed at the hotel and she stopped him from committing suicide. He said he was despondent because a girl he was staying with ran out on him.

In Philly, Riordan meets with Lieutenant Sam Lubinsky (Levene) and we see through flashbacks the biography of Swede unfolding. The Swede had to serve 3-years for a robbery; but, Sam, who grew up with him and was always friendly with the fighter, tried to look out for him. He remembers Swede’s fighting career ending because he broke his right hand. Sam even married the girl (Virginia) that Swede left. After Swede quit fighting he got involved with the wrong crowd and fell in love with the film’s femme fatale, Kitty Collins (Ava); even though, he knew she was the girl of a gangster called Big Jim Colfax (Dekker).

Swede’s downfall is traced to Kitty. She double-crosses him after a big-time heist Swede gets involved with, in a gang put together by Colfax. It is through Riordan’s insistence to get to the bottom of the mystery, that we learn why the Swede didn’t care what happened to him anymore.

For Riordan, he gets to see justice done. But the tragedy that happened to Swede is a personal matter and not society’s fault — of him foolishly putting his trust in a beautiful woman who was rotten to the core. The film is more or less a pessimistic reaction to the post-war period and of the greed and lust that blinded some. It should also be noted that Miklos Rozsa’s musical score was later used by the hit TV show Dragnet. 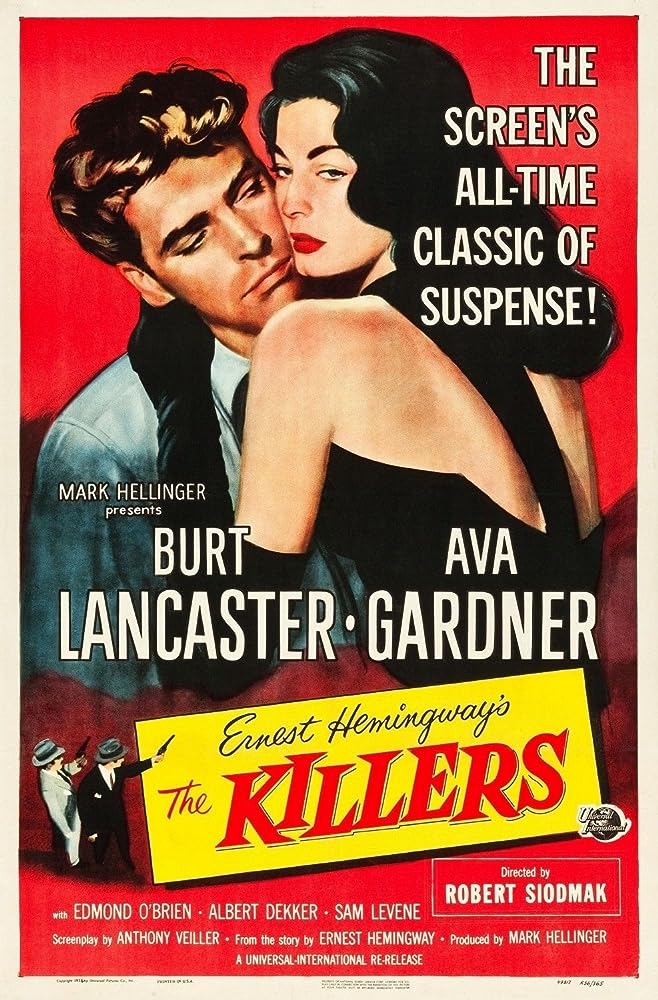