“It takes an eye-opening, unglamorous view of the black Los Angeles ghetto of the post-Watts riots.“

It’s an overlooked indie classic that never received a commercial release (the director never cleared the hurdle to use the pop music soundtrack) when first made but still through word of mouth became a revered film, as it was shown at film festivals and museums. It was allowed to corrode until newly restored by the UCLA Film and Television Archive and blown up to 35 millimeter, and after thirty years of neglect properly released in select theaters (proving that sometimes it’s never too late to make up for past omissions). More recently it was released on DVD through the courtesy of Milestone.

The striking black-and-white film was the 33-year-old Charles Burnett’s (“To Sleep With Anger”/”The Glass Shield”/”My Brother’s Wedding”) initial film and master thesis project while a grad student at UCLA. It was filmed by Burnett in 16-millimeter over a period of several years in the early 1970s and shot on weekends, for less than $10,000, and serves as a realistic everyday slice of life view of the African-American working-class to counter the already outplayed and outrageously phony Hollywood blaxploitation films which were the rage in the early 1970s. It takes an eye-opening, unglamorous view of the black Los Angeles ghetto of the post-Watts riots, as it uses jazz, the Blues and Negro spirituals in the soundtrack to set its harrowing mood of poverty breeding misery and to offer a compassionate look at how a functional family battles against such hardships without sentimentalizing or waxing poetic about this tough trip. It effectively uses in an ironical way Paul Robeson’s spiritual “The House I Live In” to set its torrid mood without raising its fist in the air Black Panther style, as it goes on to show and tell what America is like for some of its disenfranchised citizens.

Downtrodden Stan (Henry Gayle Sanders) is a hardworking slaughterhouse worker, killing sheep (thereby the title–those work scenes were filmed in a Northern California slaughterhouse), with a long-suffering unnamed wife (Kaycee Moore) and an adolescent boy (Jack Drummond) and a five-year-old daughter (Angela Burnett, played by Burnett’s niece). Stan’s tired of struggling and getting nowhere to relieve his poverty, but has no clue on how to change his lot in life. When some neighborhood wise guys call on him at his home and promise him some easy money in a shady deal, his wife shoos them away with her sneers. The breadwinner’s boy fills his idle time by hanging out with a group of other adolescent boys who throw rocks at signs, playfully fight in an empty lot and run aimlessly around in the street where they sometimes foolishly jump across roofs or mischievously dirty for no reason someone’s clean laundry drying on a line. The adults also find their free time frustrating. Stan purchases on the cheap a used car motor, probably stolen, from a shifty family, but the motor breaks when it falls off the back of his pal’s van. On Stan’s day off, on Saturday, he rides with his wife in a friend’s car to the racetrack, hoping to hit on a longshot, but they never reach the track because of a flat and no spare tire. The sexiest scene has Stan slow dancing with his pretty wife in the house as Dinah Washington croons their song “This Bitter Earth,” but he doesn’t follow through when his wife makes bedroom eyes. These and other vignettes in this plotless original film all signal the frustration of urban life and of institutionalized racism, and how difficult and sometimes comical it’s coping against such overwhelming odds to make a go of it. The title of the film could indicate that the real killer of sheep (blacks) is America.

It won the Critics’ Award at the Berlin Festival in 1981, and in 1990 it was placed on the Library of Congress’ National Film Registry. If it reminds one of Italian neo-realism films, it should be of the ones that are more akin to films shot with conviction like Visconti’s Rocco and His Brothers than to De Sica’s more conventional and faux take on poverty in The Bicycle Thief. Burnett shows that the hard life sucks the hope out of both the adults and the children in the blighted community that is filled with stretches of bombed-out homes and despair, which makes it a much tougher challenge to survive here than in many other parts of America–as Burnett implies that such a hard life is not to be merely ennobled (which he does) but to be understood as unacceptable. 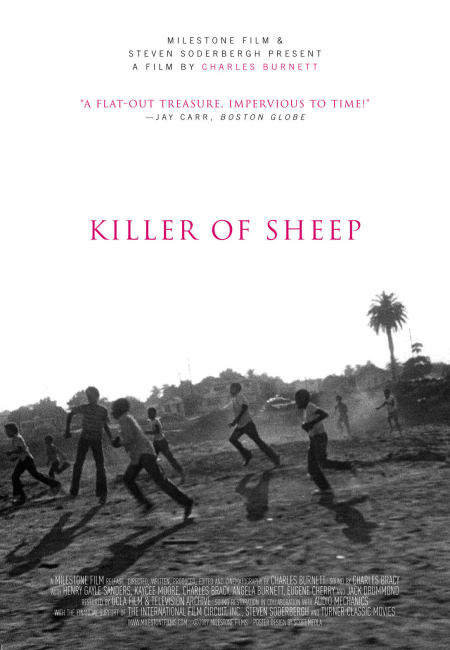