“Not afraid to hit Bush hard in a crass way and rip him as an evil moron.”

Alfred Eaker (“Jesus and Her Gospel of Yes”) is writer, star, producer and co-director with Ross St. Just of the shoestring budget fantasy indie, W the Movie, that follows on the heels of Oliver Stone’s more sober-minded and gentler mainstream biopic on the George W. Bush presidency. Mr. Eaker is a surrealist painter. His psychedelic-like art set designs (digitally animated, with most of the film shot in front of a green-screen) and the characters zany performance art are the main driving force for its uniqueness.

It’s made for those who never tire of Bush-bashing, even if it’s seen after his presidency when he’s disappeared from the public eye and hatred for him has been tempered only by the immediate and pressing economic crisis taking front stage and with no impetus by the new administration to bring him up on war crime charges. For those who are apolitical or Republicans, this film comes with an unapologetic liberal agenda that might appear like a bewildering experience if you never really got how bad a president was W. Even though the satire often flags, or the story line turns heavy-handed, or it goes on for too long on the same one-note, or meanders into an awkward biblical story about a modern-day Samson needing a testosterone cream that doesn’t seem to fit into the Bush tale, it still has staying power if you’re in the market for a film that’s not afraid to hit Bush hard in a crass way and rip him as an evil moron who fooled most of the people and did great damage to the country. It’s this relentless attack on Bush that got my attention, as the entertaining physical comedy film in a silly way throws off any kid gloves to dissect Bush’s ill-conceived power trip surprisingly as well or even better than many of the more serious higher budgeted and high-minded films.

When a meteor crashes in the Arizona desert, a wacky Texas oil tycoon discovers both the meteor and his long lost son, W. Daddy then backs sonny boy, who has arrived from another planet, to run for president, and W.’s further aided by his brother Jeb Head fixing the ballot box in Florida so he can win the national election. It has W. after the 9/11 attack by Ben Llama using the false argument of Saddam Hussein having Weapons of Mass Destruction to attack Iraq in a pre-emptive war. From thereon his presidency goes into the dumper, as the so-called “uniter” divides the country as he rails against intellectuals, liberals, thinkers and critics. When W.’s nemesis Blue Mahler prints his anti-Bush political attacks in the ‘Issues and Alibis’ magazine, the President feels threatened and his presidency spins out of control in its failure to get anything right it touches upon such as the War on Terrorism, the Iraqi War and Hurricane Katrina. Mahler appears in a face painted half blue and half red to indicate the country is divided between liberal and conservative states, while an always screaming and nasty W. has the colors of the American flag painted on his face.

The performers are all non-professionals and seemed to have fun putting on this loud rant, though the acting of most of the supporting cast leaves a lot to be desired. The comedy was sophomoric, best suited for the college frat crowd, but making up for its lack of maturity and stale material with lots of energy. It’s a film preaching to the choir, as I doubt if it can influence or even interest the undecided fence-sitters. 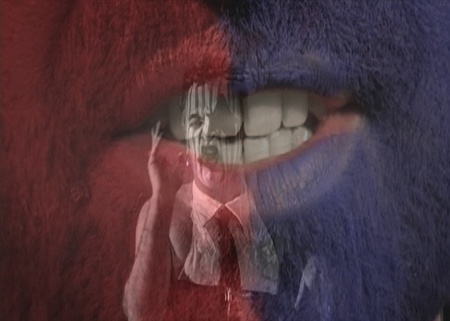