“A true triumph for the underdog.”

This is one of the elite films in the silent comedian Harold Lloyd’s oeuvre along with Safety Last, Speedy and The Freshman, though often overlooked since it never got as much play in modern times as the other films. This film might not be his best but it has more human feelings than his other more mechanical slapstick comedies and daredevil stunt acts, even though the plot line is thin and it’s used basically as an excuse for Lloyd to employ a series of gags, pratfalls, and daring physical stunts. The story is credited to five writers and lists two directors. Rumor has it that an uncredited Lewis Milestone also worked on the pic as a director for a few days. But the film’s real creator is Lloyd himself. It was acclaimed by most critics and was one of the highest-grossing films of the 1920s, making Lloyd the top box office star for the year.

The film stars Lloyd as the small in stature, bashful and sensitive Harold Hickory, the youngest and weakest member of the rural Hickory family, where his widowed dad Jim (Walter James) is the brutish county sheriff of the mountain community of Hickoryville (shot mostly around Placentia, Calif.) and his two older strapping brothers (Olin Francis, Leo Willis) look upon him as a sad sack unfit to help them and treat him with contempt. But Harold proves to be clever in coming up with inventive Rube Goldberg-like devices to help him do his farm chores.

When the cute young single girl, Mary Powers (Jobyna Ralston), has no place to live when the medicine tent show she’s traveling with burns down, she moves in with Harold’s family. Everyone in the family is attracted to her, but Harold uses his wits to charm her. That night she stays on a neighbor’s farm because they don’t think it would be right for her to be in a house with just men, but Harold doesn’t let his brothers know this pretending she’s sleeping on the sofa while he’s sleeping in the barn–which leads to a few funny gags, such as when Harold puts curtain rings on his arms to fool the brothers that they are serving Mary breakfast while he remains hidden behind the curtain. What no one in the family knows is that two members of the medicine show, the carnival strongman Sandoni (Constantine Romanoff) and Flash (Eddie Boland), are sleeping in the barn and when they learn that the sheriff is holding the town’s money for the building of the dam celebration tomorrow, they steal it and escape to an abandoned ship. Meanwhile the town elders think Jim stole the money and when the two brothers can’t catch the thieves, their father is about to be hanged but Harold by accident comes upon the abandoned boat the thieves are staying at (along with a mischievous tiny spider monkey from the medicine show) and in one of the great physical comedy bits recovers the money, nabs the thieves, saves his grateful dad in the nick of time and wins the girl. A true triumph for the underdog. 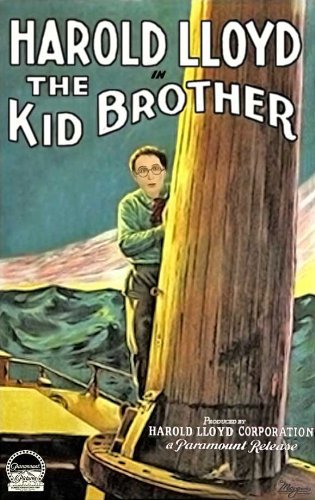