“Its hipness failed to rub off on me.”

A quirky Western set in Texas at the turn-of-the-century. Kid Blue is played by Dennis Hopper, who in the funny opening is jumping on the train’s roof — but falls off as the robbery is bungled. He therefore decides to become an honest citizen in the dusty town of Dime Box, as his fellow gang members laugh at him.

Kid Blue now is called Bickford Waner as he becomes a working man, living in a boarding house, where he’s constantly insulted for not knowing the Bible by a fanatical Christian, who taunts him for being a heathen. Bickford gets a janitor’s job in a barbershop, but gets fired when he puts shoe polish on a patron’s hosiery by mistake. When the hostile patron retreats to the saloon the liquored up Bickford pummels him, but the tough guy gets up off the floor and calls him a “peckerwood” and aims to kill him with his shotgun. Sheriff ‘Mean John’ Simpson (Ben Johnson) intervenes by killing the stranger.

In the boarding house Bickford makes friends with a couple, Molly (Purcell) and Reese Ford (Oates), as Reese is in need of manly friendships. Bickford is never fully trusted by the ever-suspicious sheriff and is constantly goaded and watched by him. At one point the sheriff tells him “When you hear my voice, you grow roots.” Reese, in his discussions with the illiterate Bickford, is in the habit of comparing things to the way the ancient Greeks of mythology acted. He says the townspeople wouldn’t know a beautiful thing if it was right on top of them.

Bickford continues his quest to be a good citizen by becoming a chicken plucker. When that job fails he goes to work on the factory assembly line of a novelty ceramic company owned by Mr. Hendricks, whose money making product is a Santa Claus ashtray.

Bickford’s friendship with the Fords leads to him taking a bath Greek style with Reese, and with Molly forcing herself upon him, and the finding out that his old flame (Janice Rule) from Forth Worth turned down his proposal by letter. It was written by Molly because Kid Blue is illiterate. It requested her to come to Dime Box — but she will later show up on the assumption he’s up to some larceny.

As all Kid Blue’s menial jobs end in failure, he schemes to rob the ceramic plant’s payroll. When Bickford’s thwarted by the sheriff, he tries to escape on an aerocycle, a machine designed by his friend Preacher Bob. Bob was an engineer back east, but because of his drinking problem lost his family and now preaches the gospel as he hears God telling him to take care of his own needs first and worry about what’s right secondly. The machine fails but Kid Blue rides away to safety with the loot, as his Indian renegade friends bring him a horse in the desert.

It was a keen satire of the last of the frontier days, but its hipness failed to rub off on me. I just didn’t find Hopper funny and found he was miscast playing a character called “Kid,’ especially when he looked too old for the part. 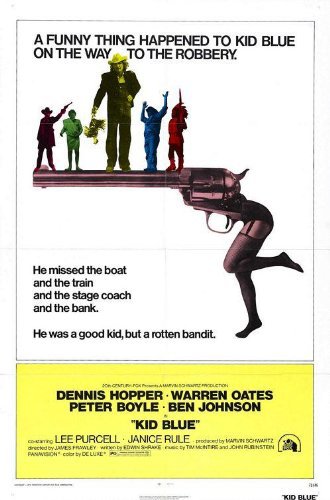