This Disney presentation of a time travel fantasy tale has the good sense not to try and spend too much time clearing up what theoretical scientists say is impossible: It is not possible to go back to the past and change history. “The Kid” is a children’s story but is stretched into an adult one as well. It is a self-discovery tale about a 40-year-old, ego-driven, high-powered “image consultant,” Russ Duritz (Bruce Willis), who meets himself as a pudgy dweeb back when he was an eight year old (Spencer Breslin). The kid is presented as someone real, who is not happy at the way he sees he turned out as a man. He tells Bruce Willis he is not impressed with his money or status but thinks he turned out to be a loser because he has a facial tic, there is no lady in the house, no family, no dog, and he is not a jet pilot.

Bruce, at first, thinks he is having hallucinations when he sees the kid break into his secure theft-proof house. This causes him to see a shrink and demand some powerful medication to prevent a nervous breakdown. When he keeps seeing the kid and a small red airplane circling him, he still thinks he is hallucinating. When he calls his loyal and tough-minded assistant, Janet (Lili Tomlin), to verify if the kid is real, that is all the proof the film needs that this is actually happening.

When Bruce sits down with the adorable and always alert youngster, they compare distinguishing characteristics such as birthmarks and scars; and, Bruce comes to the puzzling conclusion that this kid must be himself.

The story is about Bruce and how he must take hold of his cold lifestyle, where he has become a person without any love in his life being held back from finding love because of his stunted childhood. It is usually through dreams, drugs, one’s creative work, psychoanalysis, or meditation that one looks back at their past, but Bruce is too blocked for any of that. If one were to overlook all the impossibilities about this story and just concentrate on how the Bruce Willis character comes to resolve his problem, then the film is somewhat engaging. Though it is sad to say that he resolves his problem the typical macho way, by beating up his childhood nemesis.

Bruce’s interactions with others, like with Amy (Emily Mortimer), is stand-offish. She works for him and wants to love him, but he has lost touch with his feelings and doesn’t realize that he loves her.

Bruce is seated next to an attractive woman, Deirde (Jean Smart), on a plane heading for L.A., where she is to be a news anchorperson. When she finds out what he does for a living, she pesters him for advice on improving her image. He gruffly gives her sound advice for free, which he says he will give her only if she shuts up for the rest of the flight. He thereby roughly critiques her for the way she cuts her hair, has her eyebrows, does her makeup, and the kind of clothes she wears.

The kid acts as a catalyst to bring back Bruce’s memories of what made him turn out so cold. There is the schoolyard fight with a bully who is always picking on him, something that he has always repressed. The fight takes place just before his eight birthday. Bruce gets one of his clients, a boxer (McBride), to teach the kid a one-two punch, which the kid uses in the eventful fight. This time Bruce wins the fight. But the new outcome doesn’t change the events of Bruce’s life, it just changes the way he sees things now. Through seeing himself again as a child he reaches a new understanding about his father, whom he detests because his father never understood how to raise him. He had to raise him as a single-parent after his mother died before his ninth birthday, and he caused the child to feel insecure by frequently moving. These childhood traumas once they are better understood through this time travel experience, make it easier for Bruce to know who he is.

The movie was ably directed by Jon Turtletaub (While You Were Sleeping/Phenomenon) and written by Audrey Wells (The Truth About Cats and Dogs). It has a balanced mixture of adult sentiments and childish comedy that should bring both children and adults into the same movie theater, each finding something in the film to experience together. 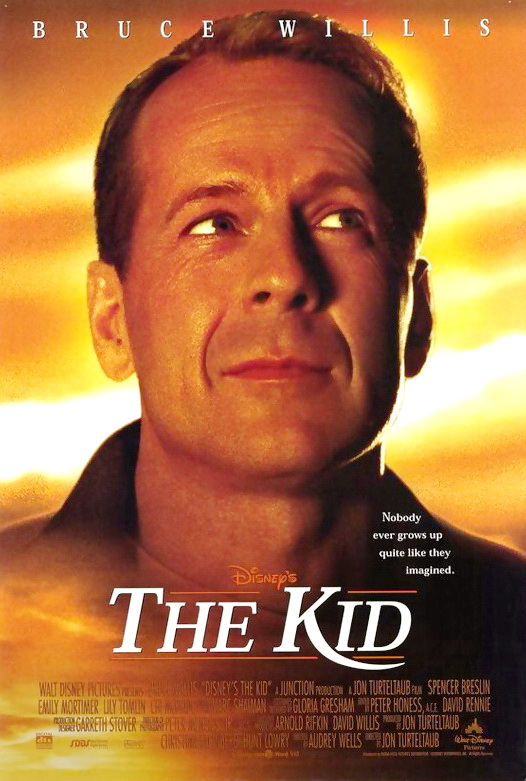