“One of Godard’s muddled failures.”

Keep Your Right Up! wasn’t released in the USA until some 14 years after it opened in Paris (and after seeing this film, I don’t wonder why). Jean-Luc Godard (“Breathless”/”Made in USA”/”For Ever Mozart”) writes, directs, edits and stars in this awkward, hermetic, free-form styled episodic comedy that pays its respect to Jerry Lewis and does a number on narrative films to promote its wacky kind of inspirational film-making.

Godard plays a film director who is referred to as ‘The Idiot’, someone who is reading Dostoyevsky’s The Idiot and makes crappy films because it’s easier that way to get a financial backer. In his latest, he’s guaranteed a financial backer if he can deliver it in 24 hours and thereby hops a plane from his home in Switzerland (where he actually lives since the mid-1970s) to deliver his latest masterpiece (which, I believe, is the same film we’re seeing) to an undisclosed location in Paris. During this transport he meets several women who admire the shiny gray metal canisters that holds the film but could care less about the film it holds. He amusingly tells them “the hardest thing for a filmmaker to do is carry the cans.”

There are many sight gags (from a golf game to air travel to a dead man with a huge knife in his belly to a glass door being slammed in a little girl’s face), philosophical wit turned against quotes from the likes of Heine and Goethe, much musings about death, eavesdropping on the rehearsals of the rock group Rita Mitsouko cutting a new album, and the gist of the film is a series of silly charades that are sometimes only too obvious and other times only too obscure.

This is one of Godard’s muddled failures, that is energetic but garners hardly any insights and only a few mild laughs (with sight gags such as the pilot reading a self-help book on How To Commit Suicide) as it never gets past being too personal, unwieldy and chaotic. All it seems to be about is a grumpy film director who thinks the world sucks big time and is dazzled every once in a while by mouthing sayings such as “In nothingness, any creation is a miracle.” Your guess is as good as mine as to what it all means. I think it’s just like one of those experimental films that one might make in a film school that has style over substance and that the filmmaker is only too glad to show off the recognizable French stars who appear in cameos such as Jane Birkin, Pauline Lafont, and Jacques Villeret. 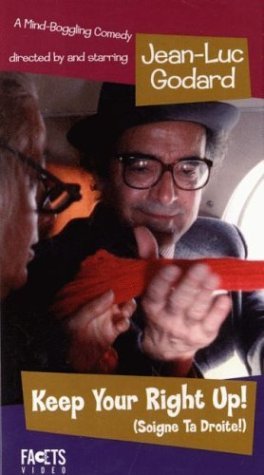