KEEP THE RIVER ON YOUR RIGHT: A MODERN CANNIBAL TALE

“… takes you to where Tobias Schneebaum has been and in an engrossing manner lets you see why he went there.”

The novice filmmaker brother and sister team of David and Laurie Gwen Shapiro shoot their documentary film in digital video and blow it up to 35mm. They have as their subject the playful, somewhat grouchy, elf-like, soft-spoken and the proud to be gay, Jewish, now 81-year-old former painter from Greenwich Village, Tobias Schneebaum. The genial and scholarly and eccentric Tobias was 78 at the time of the documentary and was suffering from Parkinson’s disease and had a number of hip replacement surgeries, and was worried that in his travels if he slipped on the mud he would never be able to walk again. He’s the kind of Manhattanite who doesn’t swim or ride a bike or drive a car–though not owning a car is not that uncommon in the city. Once he thought of becoming a rabbi or following his brother’s footsteps as a mathematician for NASA, but pursued instead a career in drawing and painting. In 1955, Tobias left his secure art world and lived for a year in Peru and for seven months of that time with the cannibal Amarakaire tribe and after that experience travelled in the 1960s to the Indonesian-occupied part of New Guinea and lived for several years with the head-hunting Asmat tribe, where he copied drawings from their art carvings and recorded their richly created art artifacts for museums. Both tribes he visited openly accept gay relationships and the men may also have female lovers.

Tobias was reluctant to make the trek back to Peru, where he quite unexpectedly was part of a raiding party when his hunting tribe wiped out a neighboring tribe and feasted on them. Though Tobias killed no one he ate a piece of the flesh from an undescribed part of the body during his tribe’s feast, which he said on the Mike Douglas TV show reminded him of pork. Tobias left the tribe in part because of the mass murder, not because of his cannibal repast; though, he said he left mostly because he felt it was time for him to get back to his beloved NYC. Tobias was thought to be dead when he was reported missing, but emerged from the jungle naked and his body painted. From that experience he wrote fifteen years later a best-selling memoir entitled “Keep the River on Your Right.” What the title implies is that he found his cannibal tribe by following the river into the jungle. That book led to appearances on the popular Mike Douglas and Charlie Rose TV talk shows.

When asked about Tobias’s going native by the filmmakers he said the open and loving Indian tribes who welcomed him unconditionally, made him feel at home and he felt good escaping from a closed-minded society back home in the 1950s where he couldn’t freely be a homosexual without experiencing some kind of a negative reaction. Tobias also replies that he felt relieved to be among the natives because they were more civilized than the intolerant so-called advance civilizations in the Western countries. His search was always for inner peace, something he believes he found through these travels. There is not an ounce of pretension or smugness in the very likable and witty Tobias, who doesn’t take himself all that serious but who never wavers from his belief in tolerance for all. Never being interested in money and willing to live from day to day, he gave up his flourishing painting career to become a specialist in the tribes he visited. Tobias did this by getting a one-year Fulbright scholarship to study the civilization of Machu Picchu, but wandered off into the jungle when attracted by the lure of being with a cannibal tribe. To earn money, he now lectures on anthropology and art to Barnard students at the Museum of Modern Art and to wealthy passengers on their exotic and seemingly crass cruises. He does this even though he has no fondness for tourists; when he travels he likes to become part of the community and blend in by living with those he visits.

Because of his reluctance to ever return to Peru and relive that nightmare of a raiding party, the film crew reversed the order of his travels some 45 years ago and now he starts out in New Guinea–the planet’s second largest island. To the documentary filmmakers delight he accidentally bumps into his former male lover Aipit, and it was delightful to watch the genuine way they reunited and said their hellos again. Tobias didn’t think he would still be alive after he said his goodbyes to him so long ago, and feels so much love for him that he decides not to get back together with him to then only have to leave him again.

Change has come to both places and it’s all not for the good. In Peru the Amarakaire tribe’s cannibal days have vanished, as they no longer sing their hunting songs and they now wear clothes. But they also live upstream in the Amazon from their ancient homeland and seem impoverished and beaten down. In New Guinea, the Asmat tribe remains rooted to their homeland but they have become tourist attractions for the cruise ships who regularly take pictures of them and use video-cams to record their once-private mass circumcision ceremonies. For both tribes, their past way of life is now threatened and almost completely lost and will in all probability not exist in future generations. All the good things they have to teach civilization such as tolerance and having an open mind about sex, will now in all probability be lost to the world except as dry subject matter for some anthropology report.

Tobias always is glad to be home again with his many NYC artist friends after his excursions into the jungle, as even his former neighbor for a brief time Norman Mailer gets on camera for a few comments on someone he laughingly said was ‘the resident homosexual’ (that remark seemed to amuse only the ever-egotistical Mailer). There were a lot of filler shots throughout that added nothing to the film, such as Tobias shopping in a supermarket and eating a hot dog in Nathan’s at Coney Island and riding the subway. But because the documentary filmmakers had such a good subject to work with, a most interesting and worthy man, someone whose life is certainly not defined by one cannibalistic experience, the film works very well despite the multitude of other things they could have told about Tobias but chose not to. “Keep The River” takes you to where Tobias Schneebaum has been and in an engrossing manner lets you see why Tobias went there. I felt satisfied with that, and felt good after seeing the film as if Tobias spent some time visiting me and left his good will as a parting gift. The film wisely had a lot of shots of the beautiful smiling faces of the natives, and the one with the biggest smile might be Tobias–obviously happy to be back visiting a guilt-free gay paradise he experienced much joy in and also happy that he’s still recognized by his longtime acquaintances. 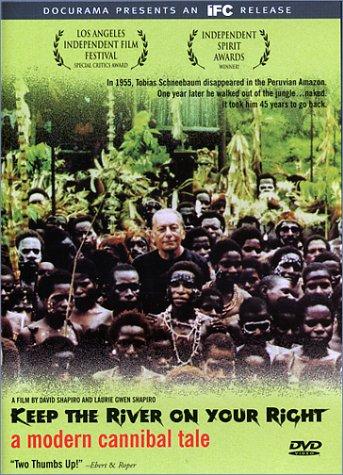