KATY PERRY: PART OF ME

An inane and boring self-promoting documentary in unneeded 3-D about good girl pop singer Katy Perry, whose parents are traveling Pentecostal ministers and raised her on Christian values and music. We learn nothing of value about Katy except such trivial external things as she’s filing for a divorce from Brit comedian Russell Brand, she models herself after pop star Alanis Morissette, has recently hit it big-time in the pop music field, and in 2011 the 27-year-old star went on a world-wide tour for a year to promote her record Teenage Dream. We also are told that Katy became the first female performer to have five No. 1 songs from a single album, but such success comes with the price tag of a divorce.

The pic captures Katy on her California Dreams tour while onstage and backstage, with interviews of Katy and her loyal crew. There are also home movies from a decade ago. The good-natured but superficial pic tells of her rise to fame, her setbacks, her pet peeves, and how she’s fulfilling her dream to appear on stage in glitter and to leave her audience feeling happy. Katy appears on stage half-naked and innocently tosses about dirty lyrics for her chorus to sing about seeing ” your peacock, cock, cock” and sings the tasteless lyric of “we went streaking in the park/skinny-dipping in the dark/then had a ménage à trois,” and the film also notes with a wink wink that the pop star’s first hit was “I Kissed A Girl.” Depicted as the girl next door type whose charm lies in the childlike pleasure she takes in exploring fantasy controversial sexual paths and wearing flamboyant costumes (like the one of spinning huge lollypops pinned on her breasts) while still getting along with her Santa Barbara, Calif. residingparents and her Las Vegas residing grandma and gaining the approval as a safe role model for most parents of her young fans.

One of her awe struck young female fans responds to an interviewer’squestion of what it’s like attending a Katy Perry concert, by saying it’s like being shot with an arrow of Katy Perryness.

If you are part of the supposedly likable talented star’s teenage screaming fan base, the film co-directed byDan Cutforth and Jane Lipsitz should be appealing. But her bubblegum music and routine of fantasy weirdness and her trite backstage dramas could be so disheartening if you can’t march to the beat of such a cartoonish pretender. 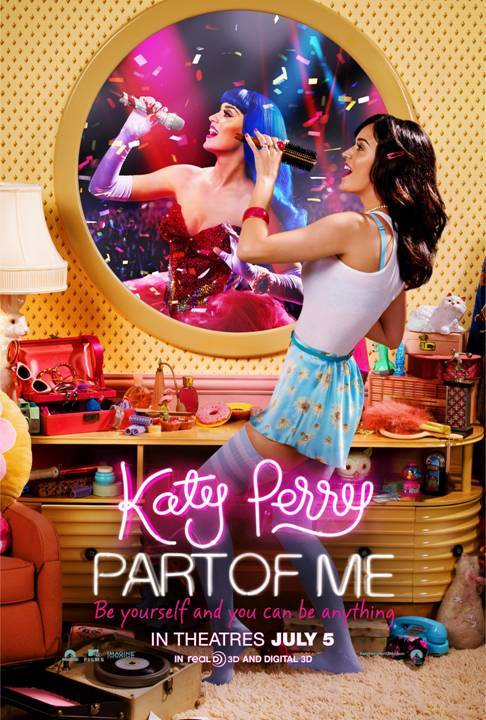