Harold Lloyd (“Take A Chance”/”The Big Idea”) co-directs with Frank Terry, and writes and stars in this sometimes funny but dated silent one-reel comedy. Harold is a recently married suburbanite, who commutes to work. With his friendly neighbor (Snub Pollard) he decides to build a shed they both can share, but things turn out to be a mess. The inept builders smash things on both properties and never get the shed to stay up. This brings on a feud, until brought together by both families saving the neighbor’s toddler from the traffic while playing in the street. 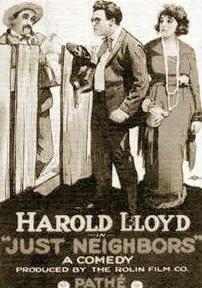