“Fans of slasher films should be drawn to the blood and gore that is so beautifully shotand is not as graphic as it could have been.”

A stylish cult horror-science fiction film directed by Jeff Lieberman(“Squirm”/”Blue Sunshine”/”Remote Control”). It’s co-written by Lieberman (under the alias of Gregg Irving) and Mark Arywitz. It’s based on the story by Joseph Middleton. Fans of slasher films should be drawn to the blood and gore that is so beautifully shot and is not as graphic as it could have been. If not a devotee of this genre, you will probably find it repulsive, slack and moronic. The film is similar to The Texas Chain Saw Massacre and to The Hills Have Eyes, but of a poorer quality. Lieberman has said that he was most inspired by Deliverance.

Five frolicking city-dwelling high school campers are hiking on an Oregon mountain to check out the country area where they just bought property. They are startled to come across a raving lunatic. He’s a drunk backwoodsman (Mike Kellin) trying to tell the teens his hunter pal just got slain by a machete and he’s left stranded on the mountain. The teens push on and are in the woods at night, after they were warned by an Oregon forest ranger played by George Kennedy to go no further. Not heeding the warning, makes them seem stupid. They soon pay for their stupidity by trying to survive a crazed pair of mutant twins (John Hunsaker) armed with machetes, who stalk them to their camp site. The teens start vanishing one at a time, as they get sliced up. The suspense builds as we wait to see if any of them can survive the night.

Though the flick disappoints it can be devilishly amusing, as it offers a most unusual motive for the perverted killers–who kill so they can wear the clothes of the vics and walk around the remote mountain dressed as tourists.

One of the five adventurous teens is Chris Lemmon. He is the son of Jack Lemmon. Now if Jack was in this flick, that would be something. 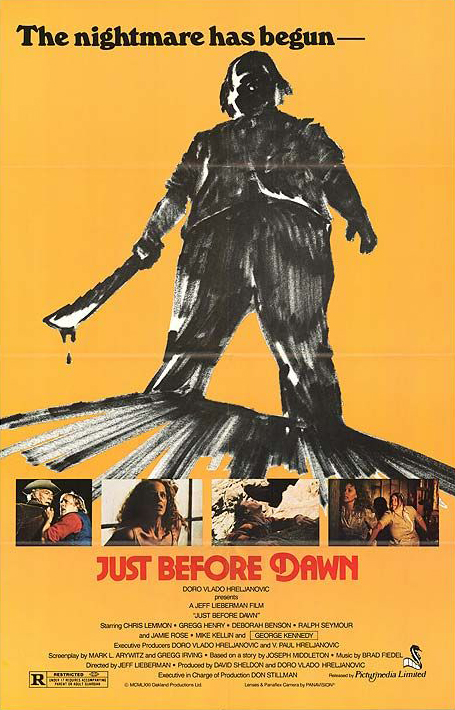