Noted French silent director of adventure films Louis Feuillade(“Les Vampires“/”Fantomas“/”Barrabas“), who lived from 1873 to 1925, was the pioneer of pulp cinema. Feuillade directs with great glee and ably co-writes with Arthur Bernede this wonderfully lighthearted escapist entertaining influential super-hero serial in twelve episodes, one that presaged the Batman serials.

Favraux (Louis Leubas) is a corrupt investment banker, who cheated the family of Judex (Rene Creste) of their life savings. To avenge that foul deed the dorky Judex–meaning Justice– dons a black cape to travel around in his car with his pack of hounds in the Paris suburbs to fight the enemy. Judex sends the banker veiled threatening messages to repent and give away his fortune to charity (Public Assistance Bureau) or else he will ruin him. An ex-con tramp named Pierre Kerjean (Gaston Michel), claiming to be a vic of the scheming banker, also demands his money back but soon is killed in a suspicious car accident. F. responds to these threats by hiring private detective Cocantin (Marcel Levesque) for protection. Despite the protection, when F. fails to donate half his fortune to charity, he’s killed. The innocent widowed daughter of F., Jacqueline Aubry (Yvette Andreyor), lives peacefully with her little boy Jean (Olinda Mano) in the country, until also threatened. After F.’s fortune are the opportunistic thieves Robert Morales (Jean Devalde) and Diana Monti (Musidora), who posed under an assumed name as a governess in F’s castle in order to seduce him. Also after the money is the dissolute aristocrat Amaury de la Rochefontaine(Georges Flateau), who is courting Jacqueline to get his hands on her father’s millions.

The vigilante avenger uses disguises, gadgets and his powers of hypnotism to fight for justice outside the law. It’s all truly enjoyable, cinema at its most inventive and entertaining. 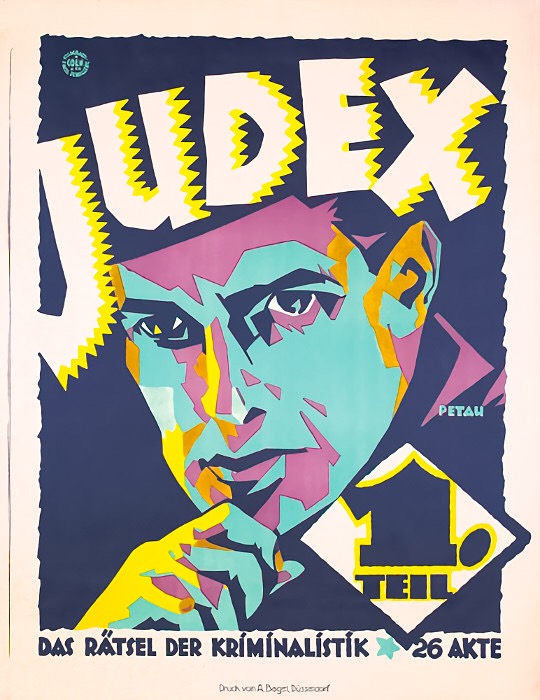