“One of the more bleak but imaginative nihilist films to come out of England in the 1970s.”

One of the more bleak but imaginative nihilist films to come out of England in the 1970s. Painter turned filmmaker Derek Jarman (“Caravaggio”/”The Garden”/”Wittgenstein“)directs Britain’s first punk movie, that uses punk rock as a satire against the materialistic music industry. It takes easy pot shots at the establishment and calls out the punks by saying that their rebellion for freedom is not enough to counter their stifling combo of apathy and aggression as an answer to the reactionary political climate of the time. Jarman co-writes it withJames Whaley. Their vision for the future is that there’s no future, as the low-budget pic innovatively traces the country’s violent past to the anarchist present and in the process giving us a quirky history lesson in the decline of civilization.

In 1578 Queen Elizabeth I (Jenny Runacre)is aided by her astrologer John Dee (Richard O’Brien) to conjure up the angel Ariel (David Haughton) to transport her via time travel to London in the 1970s. The Queen discovers a country rocked by chaos, an ugly failed capitalism results in an urban landscape filled with graffiti and unlivable housing conditions for the poor, no heroes and the dangerous egotistical mantra of the young is to at any cost ‘make your desires reality.’ The only hope is relayed by a painter, who says our aim should be ‘to recreate ourselves as artists.’

The film’s arch villain is a raving materialistic megalomaniac,Borgia Jinz (Orlando), who has purchased Buckingham Palace and transformed it into a money-making, mind-controlling and culturally debilitating recording studio for punk musicians, that attracts a vicious marauding collective living gang of punk girls to hang out to dig the loud music and who are encouraged to act out their mindless violent fantasies against the establishment and men, engage in misogynist-like free sex, arson, tossing fire-bombs and without conscience committing cold-blooded murder. The gang members include a twisted historian who mimes Rule Britannia Amyl Nitrate (Jordan), a nymphomaniac actress between jobs named Crabs (Little Nell), a toughie pyromaniacdyed orange crew-cut punk star Mad Medusa (Toyah Wilcox), the gang’s sociopath leader Bod (Jenny Runacre) and others of the same ilk. The gang causes havoc in a cafe as it smears ketchup over a waitress before violating her further, disrupts an audition for a punk rocker, and goes on a murder spree killing cops. Impresario Borgia chortles like a lunatic and says “as long as the music is loud enough, we won’t hear the world falling apart.”

The film aims to shock by its outrageous and juvenile action sequences and its far-out black humor. Its off-beat history lesson of the monarchy tells us its values no longer are relevant in modern England, a piss-hole that’s punctuated by The Rocky Horror Picture Show (1975) sensibility over diversity (several cast members also appeared in that pic, like Little Nell and Richard O’Brien). It also references Shakespeare for some gravitas and takes delight to diss some subcultural icons from the world of punk music. When compared to other films of that period that tried to capture the mood of the 1970s in a rapidly changing England this one, despite its many faults and misuse of excesses, is better than most in getting the big things right about the extreme attitudes of the time. 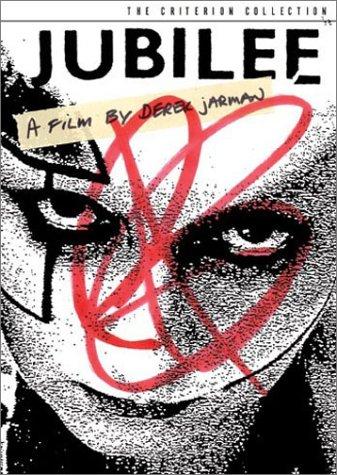