“A below-average western, which not even its star power can save.“

A below-average western, which not even its star power can save. The cast is made up of aging has-been stars such as Jane Russell (never worse), Dana Andrews (never worse) and Lon Chaney Jr.(never worse). This made on the cheap western is a bomb. It’s not given life due to the sloppy and unimaginative direction of R. G. Springsteen (“Bullet for a Bad Man”/”Taggart”/”Apache Uprising“), the terrible cliched script by A. C. Lyles and Steve Fisher (who based it on the story Fisher co-wrote with Andrew Craddock), the stilted dialogue and all the awkwardly shot action scenes. It was shrill, unappealing and unintelligent.

Marshal Johnny Reno (Dana Andrews) rides from Kansas City to the Indian Territory town of Stone Junction, Kansas (shot in Vasquez Rocks near Palmdale, California), on personal business to woo old flame saloon owner Nona Williams (Jane Russell) and apologize for several years ago not giving her a chance to explain why she helped her brother escape from jail (which made me think why Nona wasn’t in jail, but such thinking obviously had no place in a pic like this). When bushwhacked in the hills by Joe and Ab Connors (Tom Drake and Dale Van Sickle), falsely thinking the marshal was after them, the marshal critically wounds Ab and brings his brother Joe back to town under arrest. There the marshal finds out that the brothers were accused of killing the chief’s son and that the oily power-hungry corrupt mayor, Jess Yates (Lyle Bettger), wants to lynch the prisoner and offers the honest lawman $10,000 to return to Kansas City without the prisoner. The principled marshal turns down the offer, and gets the cowardly sheriff (Lon Chaney) to help him thwart a lynching by the town. The psychopathic Yates brings all the leading citizens against the lawmen–such as the well-dressed rancher (John Agar), the spineless general store owner (Robert Lowery) and the slick bartender (Regis Parton)–but they and many others can’t bring him down. In the third reel we learn that Yates’s daughter (Tracy Olsen) was dating the Indian and the racist dad got the town to kill him and frame the two strangers who rode into town.

The most ridiculous scene has the feeble looking mayor challenging the feeble looking marshal to a barroom brawl and telling him “No man alive can whip me.” But you can bet your boots Marshal Reno gives the film’s villain a beating he’ll remember for almost five minutes, that is before he goes on the attack again.

I would only recommend the film to Jane Russell fans who have a need to see all her films, even the bad ones. 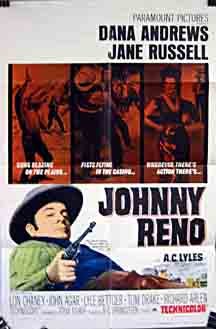