“I came out of the theater as refreshed as if I were coming out of a coffeehouse.”

The always innovative Jim Jarmusch (“Dead Man”) directs this quirky comic series of 11 short vignettes on the subject of people casually meeting at coffeehouses. Jarmusch made a similar film 17 years ago and he’s been compiling vignettes for this film ever since, using the time to shoot between breaks in his regular film schedule. Jarmusch uses a hip ensemble cast that is a mixture of the famous and the nearly-famous to act as themselves in fictional conversational pieces. The characters in the film discuss things as diverse as caffeine popsicles, Paris in the twenties, and the use of nicotine as an insecticide, all the while sitting around sipping coffee and smoking cigarettes. This is Jarmusch’s follow up to “Ghost Dog.” It’s filmed in a high-contrast black-and-white photography and moves harmoniously in a leisurely pace. The hipster filmmaker takes delight in nostalgia, fine music and absurd dialogue to fully capture just how absorbing the obsessions, joys, and addictions of life can be.

Not all the skits are of equal worth, as some were just too slight to resonate (like the one with Renée French reading gun ads while a waiter tried to give her a refill she didn’t want). Though even the slight sketches are well-structured and have some charm. But the film should be enjoyed for its overall effect and to relish in the ease and grace in which the filmmaker takes digs at everything from pop culture to strained relationships. I came out of the theater as refreshed as if I were coming out of a coffeehouse.

The skit with musicians Jack and Meg White of the White Stripes, a former couple but posing here as siblings, is explosive. They discuss the Nikola Tesla (1856-1943) coil and touch on the physics of electricity pioneer Tesla and his offering of an alternative in free energy to Thomas Edison’s private electricity enterprise. Added depth to the skit as a metaphor for both art and science comes from the line penned by Jarmusch about Tesla that echoes with the power of poetry: “He perceived the earth as a conductor of acoustical resonance.”

The opening skit has Steven Wright and Roberto Benigni as two nervous new acquaintances addicted to caffein and Wright claiming he likes the caffeine before bedtime because his dreams go faster. Their cafe meeting ends when the two are unable to communicate with each other any longer, as one of them takes the others place to go off to a dental appointment. It was funny in a SNL kind of way (that’s the TV program where it was filmed in 1986). There are two refreshing shorts with doses of bitterness–one starring Steve Buscemi along with Cinqué Lee and Joie Lee as twins (they’re not in real life, though they’re the less-talented siblings of Spike Lee). Buscemi is a hillbilly Memphis waiter who raps about Elvis’ twin brother, while the twins offer in return a riff about how Elvis stole his music from black musicians such as Otis Blackwell and Junior Parker. The other refreshingly bitter skit has Tom Waits and Iggy Pop in a California coffeehouse, as Waits lights up after he says it’s okay because he quit smoking. The pop singers depart over a misunderstanding, but Waits is relieved that not only his songs but Iggy’s are not on the jukebox.

The film’s last skit “Champagne” was just wonderful as a fitting tribute to forgotten actors of the underground New York filmmaking scene, as we saw Taylor Mead (Andy Warhol regular) and Bill Rice (played a role in Amos Poe’s “Subway Riders”-81) take a coffee break in the SoHo Armory hangout. Taylor believes he hears Gustav Mahler’s song “I Have Lost Track of the World” being played and tries to get his rebel pal to listen before he fades out in dreamland to the song as it’s orchestrated.

My favorite skit was the one titled “Cousins?” with Alfred Molina (recently starring as the villain in Spider-Man 2) and Steve Coogan (a popular Brit TV comedian) as actors meeting for tea the first time in an LA coffeehouse with different feelings about learning they’re cousins. It was the most developed skit, one parodying the ironies of showbiz. The emotionally starving Molina is snubbed by the more recognizable but twit-like Coogan, only to find things reversed after a cell phone call from “in demand” director Spike Jonze. Another titled “Cousins” has blonde Cate Blanchett in a dual role playing both herself as a sophisticated Hollywood superstar always on the go and her envious loser Aussie cousin Shelly. They meet in the lobby of a luxurious hotel, as Cate is between publicity interviews. The more Cate tries to make nice to her brunette cousin, the more resentful ‘cuz’ becomes. The one called “Delirium” had Bill Murray moonlighting as a gullible waiter who is recognized by his sole customers RZA and GZA (of the Wu-Tang Clan). The rappers drink herbal tea and give Murray some remedies from alternative medicine to cure his caffein addiction.

The film’s magical moments lie in the celebration of conversations among friends or acquaintances or relatives, conversations that are unpredictable and are often as troublesome as they are joyful. Jarmusch’s free-associative movie might not be for all tastes, but is a must-see for his fans and should please those not afraid to go with the java and nicotine. Jarmusch is an excellent craftsman who has learned his art as well as any filmmaker working today. He is also a master of minimalism and of using unique camera angles to draw out contrasts in pictures that tell stories without words, techniques he utilizes very well in this film. His main themes are about the nature of celebrity and the misunderstandings that can arise between friends and relatives. I think many film critics might have overlooked how effectively these themes were presented by being lulled into the lightness of the coffee break type of atmosphere. But though this film is less ambitious than most of his others, it’s still a splendid Jarmusch original and deserves savoring for its rich flavor. 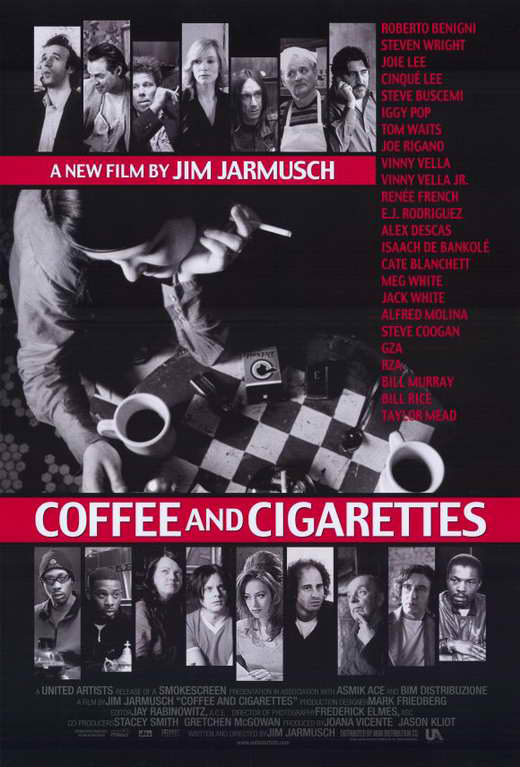