“It relies on its implausible brutal action scenes to provide most of the entertainment.“

This offbeat dreary but ultra-violent crime drama packs no emotional impact, makes no sense and is as dull as dishwater despite all the killings. It relies on its implausible brutal action scenes to provide most of the entertainment. Joseph Landon’s inept script from the novel The Kingdom of Johnny Cool by John McPartland, is filled with holes. The only thing cool about the film is that it has two criminals in it who call themselves Cool. Longtime TV director William Asher (“Beach Blanket Bingo”/”Movers & Shakers”/”Mobs, Inc.“) directs this sadistic revenge thriller as a shocker, it suffers from awkward pacing, robotic acting and terrible editing.

Mafia kingpin from Chicago Johnny Colini (Marc Lawrence), known as Johnny Cool, has been deported to Rome. The wealthy elderly mobster wants to get even with the American mob that informed on him and took over his business interests, and devises a far-fetched scheme to carry out his revenge. Colini arranges for the fake death of a Sicilian mob chief named Salvatore Giordano (Henry Silva) and trains him to go to America to eliminate all the Mafia bosses who did him wrong. The young Sicilian is promised that he will inherit the Colini empire if he succeeds. If you believe this cockeyed premise, I’ve got some real estate to sell you.

The humor part comes from a number of celebrity cameos, that include ones from Jim Backus, Sammy Davis Jr. (who also sings the theme song), Mort Sahl and Joey Bishop. This ridiculous story line is a sorry excuse for a picture. 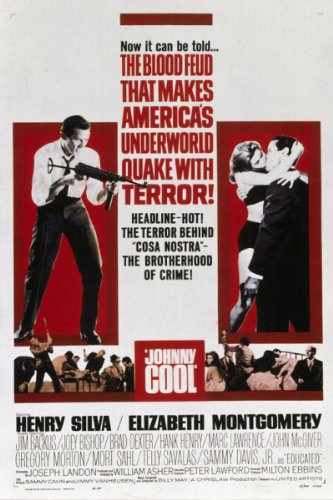