JOE STRUMMER: THE FUTURE IS UNWRITTEN

“Lively doc on the late Brit punk rocker guitarist for the Clash.”

Lively doc on the late Brit punk rocker guitarist for the Clash, Joe Strummer (1952-2002), who died of a heart failure. His real name was John Mellor, who comes from a respectable Brit globetrotting careerist diplomatic family and who received a first-class education in some posh private schools. From 1976 until the band broke up in 1986 Joe was the colorful legendary guitarist, composer and frontman for the Clash, who afterwards drifted aimlessly, did some acting and composing for avant-garde films (like “Walker”), turned from womanizer to a devoted family man, formed a new touring band called The Mescaleros, and became noted for his outdoor bonfires during such music events as the Glastonbury festival.

Brit filmmaker Julien Temple (“Earth Girls Are Easy”/”Glastonbury”/”Absolute Beginners”), a lover of the pop music scene, enterprisingly shows the flawed musician as a great communicator, as he pays homage to his combative spirit while showing he’s a difficult person to say you know because of his complex and mercurial nature. Through Joe, Temple mostly explores the Clash’s problems with reaching such unexpected success, the usual problems rockers have over drugs and ego, and the politics of the times that influenced their music.

Joe’s story is told in astraightforward chronologically arranged order through interviews with celebs (who are maddeningly never identified), using Joe’s voice from radio broadcasts and old conversations, and archival clips. It should be noted that probably the reason why no one was identified was because Temple was trying to make a statement that everyone watching this flick should easily recognize someone like Mick Jones and know he was a member of the Clash (unfortunately I was not a follower of the band and was unnecessarily left on my own trying to sort out all the musicians).

Those not punk rock fans would probably not get as much out of this film as those who are fans. For me, it piqued my curiosity and I found the music to my liking (loved Joe’s “I’m So Bored with the USA”). 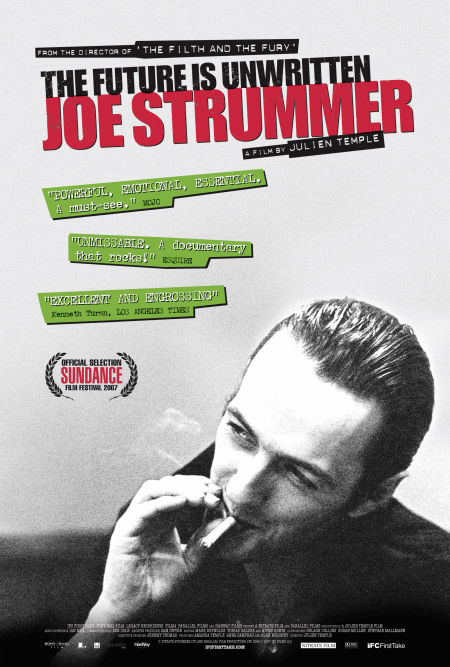