“Imelda Staunton, a noted British stage actress, gives the best performance of any actress I have seen in the last few years.”

Mike Leigh’s (“Topsy-Turvy”/”All Or Nothing”/”Secrets & Lies”) uncompromising drama is a nearly perfect visualization of a kind-hearted married woman, employed as a domestic, the mother of two grown children, Vera Drake (Imelda Staunton), who in the postwar London of 1950, a time of shortages and black marketeering, secretly performed abortions without getting a fee to help poor young girls and was convicted of that felony (it wasn’t until 1967 that abortion became legal in England). Her goodness is always shown as real; her misery is revealed from the moment the police enter her tiny flat until she is last seen serving the 21/2 year stretch in prison. It’s a grim but potent offering that makes no attempt to hide its political sympathies but does not do it at the expense of the lawmen, who are shown to be competently serving the law as it’s written. Nor does it debate the issue of abortion in terms of right or wrong. Leigh instead makes his mark by carefully weaving the tale around someone who broke the law, but is saintlike not because of spouting some dogma but because of her humanity. It’s vintage Leigh to tell his tale by bringing to the forefront the small details of that period, how the main characters perform their career work, the way they lived, their dress and manner, and the strong family influences that motivated the heroine.

The film, as noted in the credits, is dedicated to Leigh’s medical doctor father and midwife mother.

The middle-aged Vera in the film’s first half is pictured as a loving wife of 27 years to her auto mechanic hubby Stan (Phil Davis), who works for his brother Frank (Adrian Scarborough). She’s also the doting mother to her gregarious son Sid, an apprentice tailor, and daughter Ethel, a light-bulb factory worker, and looks after two glum shut-ins–her elderly mother and George, whom she regularly serves tea. Between her work as a cleaning lady for the wealthy and her trying family responsibilities, which include fixing her bashful, plain daughter up with a perfect match Reg (Eddie Marsan), Vera, as she puts it, is “helping girls out.” Vera does so after Lily (Ruth Sheen), a friend from childhood and black marketer of household goods, gives her the names of those in need of an abortion. Lily views things more businesslike than Vera, and without telling her charges a fee for the services. In contrast to Vera’s poor girls in trouble, who lack choices, Leigh manages to sympathize with a wealthy young girl, Susan (Sally Hawkins), whose mom employs Vera as a domestic. Susan is shown after a date rape handled with the best of care possible, but in the cold bureaucratic medical system where no one cares about her as a person (indicating that even a wealthy woman, receiving the proper medical treatment, still suffers because she’s looked upon as a second-class citizen).

Vera’s troubles begin after complications to one of her patients causes her go to the hospital, and the doctor reports to the police the cause of her problem is a forced miscarriage. It results in four policeman coming to Vera’s home to question her on the day she’s celebrating her daughters upcoming marriage to Reg and Joyce’s first pregnancy, where under Inspector Webster’s patient interrogation she confesses her guilt.

The film might not bring anything new into the ongoing Roe vs. Wade controversy, but it offers a sobering no-nonsense work that relies on reflecting on a saintly woman and her personal courage to selflessly do what she had been doing for some 20 years without telling her conservative working-class household.

The brilliance in the film is that Vera is dealt with in a way that is not sugarcoated and lets us see how those living in her time would judge her. Leigh does not give her a modern look, but fully shows what she had to endure as she became a martyr to an unjust system. This realistic attitude to his heroine is what gives the film its unforgettable raw power.

This is the edge Leigh offers in his presentation, in a film that is not meant to be entertaining but to be appreciated for its sympathetic portrayal of the innocent heroine who never thinks of herself first, its lucid storytelling, its craftsmanship in filming and the wonderful ensemble cast and their brilliant performances. Its stark realism and how it lays it on the line by dividing the characters into either good or bad souls– is what gives the film its urgency.

The diminutive Imelda Staunton, a noted British stage actress, gives the best performance of any actress I have seen in the last few years. 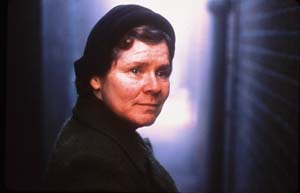