“All the film’s energy goes into Ian Holm’s stellar performance.”

Joe Mitchell (Tucci) is a transplanted Southerner living in New York City in the 1940s, earning his keep by writing for The New Yorker magazine. He speaks in a hesitatingly slow, thick, Southern drawl, and is a very modest, inward man. Joe is always the gentleman, and appears to be vulnerable to criticism even from his elementary school-aged daughter who thinks one of the stories he is working on is boring. When his editor Mr. Ross (Tovatt) compliments him on a story he turned in, he seems too shy to accept the praise without stammering. He is comfortably ensconced in his New York Greenwich Village apartment, living there with his wife Therese (Hope Davis) and his two young daughters.

Joe’s life will be altered forever when he decides to write a feature story on a homeless, Harvard educated, bohemian, the legendary Joe Gould (Sir Ian Holm). Gould is a disheveled, raving madman, living off his wit and charm. He gets handouts from those in the Village sympathetic to his plight, contributing to what he playfully calls the ‘Joe Gould Fund’ that he has established to take care of his basest needs. He has dedicated his life for the last 25 years or so to writing a literary tome entitled “The Oral History of Our Time.” So far he has supposedly written over a million-words to record his essays and the ordinary conversations people have. He claims to have stored most of the writings in the basement of a chicken farm in Long Island, writings that are composed in a school composition book. But when asked to produce these writings by Mitchell, he can only come up with two books of essays.

Joe Gould’s life is a difficult one, where his level of discomfort is beyond reasonable expectations. Gould is also too gabby, too drunk, too much of a liar, and cannot discipline himself to write as much as he talks. But he is not dull. At one Poetry Society recital, he propels himself onstage to recite his comical Zen ditty as an opposite response to all the stuffy poems from the society members: “In the winter I’m a Buddhist, In the summer I’m a nudist.”

All the film’s energy goes into Ian Holm’s stellar performance. Gould is personified as a fiery maniac and first-class exhibitionist who when painted by Alice Neel (Sarandon), an artist, who is quite taken with him as a genuine bohemian character, she nevertheless unromantically paints his portrait by giving him three penises as she says one won’t be enough for him. He does most of his performing at a few local Village bars, where he is given free drinks. The actual bar he hung out in was The Minetta Tavern, where he was viewed as a tourist attraction.

Joe Mitchell had great success with the 1942 story he did on Gould, entitled Professor Sea Gull, where he wrote about the strange man in terms of being a folk hero telling how he can communicate with seagulls and about his history tome. The magazine story made him a local celebrity.

Mitchell tells how he first met Gould in a Greek luncheonette, where the owner lets him have a free bowl of soup, whereby Gould insanely pours in a whole bottle of ketchup.

After Mitchell finished the well-received story, he couldn’t get rid of Gould who made himself a nuisance by visiting his office daily. They then went their separate ways. In 1964 Mitchell wrote Joe Gould’s Secrets, which had a more downbeat tone to it than his first Gould story. Strangely enough he seemed to have caught something of Gould’s madcap psychological state himself or became enveloped by Gould’s doppelganger, because he never was able to write again for the magazine though he still reported to work there until he died in 1996.

Joe Gould after living in countless homeless shelters and on the street died as a pauper and in a mentally unbalanced state at Pilgrim State Hospital on Long Island in 1957, with his tome never found as Joe Mitchell knew it wouldn’t be.

This is a wonderful screen adaption as scripted by Howard A. Rodman, who caught the nostalgic and generous mood of Greenwich Village of the 1940s. Ian Holm’s performance is brilliant and sparkling, one of his best in his long and distinguished career. Stanley Tucci mirrors the inward struggle Gould has in writing down what he feels, even though they have completely opposite personalities. There’s gold to be mined in this story about understanding writers who can’t write anymore and of characters who can’t stop themselves from destroying their gift of life. This cautionary story pictures a city that has changed so much from Joe Gould’s time, that a talented eccentric nowadays should expect to receive no help from a city that is becoming less interested in helping its weirdo artists or its mentally ill; instead, turning its attention to more mundane concerns. 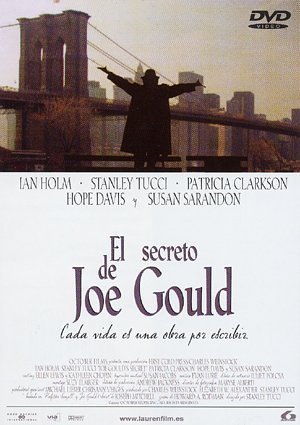