“It would have tasted more like lemonade than a mint julep without Bette Davis’ fiery performance.”

As the story goes, legendary actress Bette Davis was enraged at studio boss Jack Warner for not letting her go to another studio to play Scarlett O’ Hara in Gone With the Wind and this similar romantic melodrama, set in the ante-bellum New Orleans of the early 1850s, was seen as compensation for that loss. But the story doesn’t add up since GWTW came out a year later, as it seems more likely Bette was glad to get this part and couldn’t manage to do both films because of scheduling problems. In any case, Bette, already a star, credits this film as the one that propelled her into superstardom. She won an Oscar for Best Actress. William Wyler (“Wuthering Heights”/”Mrs. Miniver”/”The Letter”), who was Bette’s lover during the shoot before a falling out with the temperamental actress, ably directs from a play by Owen Davis; the team of writers include Clements Ripley, Abem Finkel, John Huston and Robert Buckner. The film is shot in black-and-white, and asks the viewer to imagine the red dress that’s a pivotal part of the story is really red.

Julie Marsden (Bette Davis), a spoiled and strong-willed southern-belle from the New Orleans of 1852 is engaged to gentleman banker Preston Dillard (Henry Fonda), and intends to go North with him when she ties the knot. While Pres is at a business meeting, Julie calls for him to join her for her dress fitting for the traditional society Lympus Ball. But he snubs her for the business meeting about railroad matters. An irate Julie defiantly chooses a red dress instead of the traditional white dress the maidens are expected to wear. Pres is dismayed at her choice but can’t talk the “Jezebel” out of it, and reluctantly escorts her to the ball after she challenges his manhood–suggesting he’s afraid to take her because he’ll have to defend her. At the ball, Julie starts to have second thoughts about her impulsive decision when she’s ostracized but Pres insists she waltz with him, and afterwards breaks their engagement. The sexually insecure Pres refuses to change his mind and leaves on a business trip North.

Because of the yellow fever epidemic sweeping the city, Julie refuses to go outside. She then flees the city with her guardian, Aunt Bell (Fay Bainter), to their country Halcyon plantation still expecting Pres to return and marry her. Instead Pres returns with safe Yankee wife Margaret Lindsay (Amy Bradford) and asks only that Julie accept his wife into their circle of friends. She tries to kiss Pres, but he rejects her advances. One of Julie’s suitors becomes the ardent southerner Buck Cantrell (George Brent), who argues with Pres over politics. Pres gets called back to the city on business, and Buck continues the argument over slavery with Amy. When Pres’s brother Ted (Richard Cromwell) comes to Amy’s aid, he challenges Buck to a duel and the arrangements are made through General Bogardus (Henry O’Neill). Ted kills Buck, and in turn rightfully throws the blame on Julie. In the city Pres comes down with the fever and Julie redeems herself by crossing the fever line with her slave Gros Bat (Eddie Anderson) and morphs into a self-sacrificing and contrite southern-belle as she nurses Pres, while their mutual friend Dr. Livingstone (Donald Crisp) says he’ll be taken to the lepers’ island. Julie talks Amy into letting her take her place in the colony, as she seeks redemption.

The film romanticizes the Old South as a grand old place of civility and hospitality, while at the same time casting an eye of aspersion on such a repressive society. It would have tasted more like lemonade than a mint julep without Bette Davis’ fiery performance. 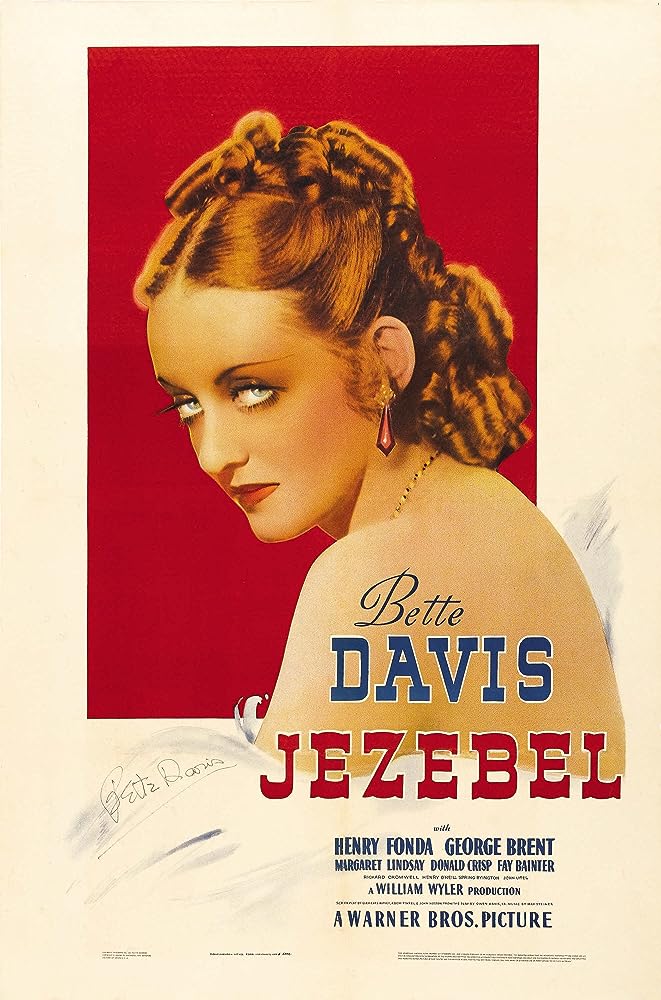