JOAN RIVERS: A PIECE OF WORK

In this unvarnished documentary, female directorsRicki Stern and Annie Sundberg (the duo gave us the doc on the atrocities in Darfu “The Devil Came on Horseback” and “The Trials of Darryl Hunt,” about an African-American falsely convicted of a crime). Here they chronicle an intense up-close look on a year in the life of the 75-year-old pioneer iconic comedienne and survivor-Joan Rivers. It details her drive to always be working and go on forever, her insecurities, her need for plastic surgery, her concerns about aging, her rapport with her staff and her shrewd scheming nature to stay active in a showbiz world that can be cold.

A Piece of Work gives us a relentless workaholic Rivers, the “Can we talk?” comedienne, who looks back at her 50 years in the industry with both a fondness for being one of the few stand-up woman comedians to make it and with heartbreak over the nasty split with her mentor Johnny Carson, who put the unknown on his show where she became his favorite guest and as a result it jump started her career as a comedian. Then the embittered Carson left her with permanent emotional scars when he never spoke to her again and blacklisted her from NBC after she signed with Fox to host a rival, soon to be ill-fated, night-time talk show.

The film also follows Rivers preparing for her role in her autobiographical play, which was well-received at the Edinburgh Fringe Festival but flopped in London (and therefore never reached Broadway). Rivers, who her long-time manager says will take any gig, is shown in a rural wintry Wisconsin Indian casino doing a stand-up act and after cracking a joke about deaf Helen Keller is heckled by a self-righteous patron who says his son is deaf and she has to ad-lib her way out of that tight spot.

On personal matters, Rivers frankly talks about her marriage to TV writer and producer Edgar Roenberg and his 1987 suicide. We also see her interacting with her grown daughter Melissa, and they both appeared on Donald Trump’s Celebrity Apprentice. The tearful and pissed Melissa was soon fired, but Joan managed to win. Also during the course of this ‘down and up’ year, Rivers had to endure a Comedy Central roast and the firing of her longtime manager, whom she relied on for emotional support but who abandoned her once too often when she needed him there.

A Piece of Work shows archive footage of Rivers on the Jack Paar and Johnny Carson shows. It offers no commentary one way or the other about Rivers need for attention and approval, as the outsider filmmakers instead let the motormouth Rivers do all the yapping in the comforts of her own environment. The result is a celebration of Rivers as a gross-out comedian who is a survivor in the industry and the rare female who can talk dirty like the big boys, a peek at her NYC opulent Louis XIV–style apartment, watching her freely run with her usual vulgar comic shtick (not for all tastes) and self-deprecating comments on her looks, and the spewing of lots of Jewish angst. We’re left with the impression she doesn’t have much of a personal life and that her obsession with Botox as an answer to old age is her way of saying fuck you to all those who hurt her or who wish that she vanish.

It’s a snappy piece of entertainment, that lets us think we are seeing the real Joan Rivers (when that’s probably not possible) by showing us how she’s always on stage and wouldn’t have it any other way than be the neurotic she is. Her goal in life is to be on center stage longer than George Burns or Phyllis Diller, which I guess tells us all we have to know about what keeps her going. 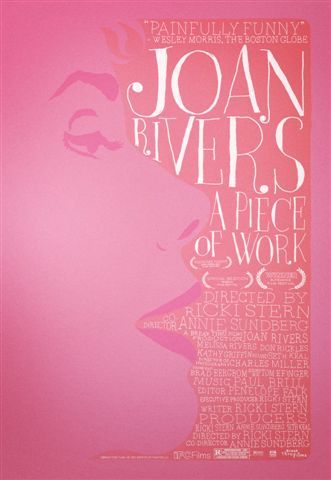