JEWEL OF THE NILE, THE

“Turns unnecessarily nasty with its racist depiction of Arabs and a barrage of racist jokes.”

A sequel to Romancing the Stone(1984), starring again Kathleen Turner and Michael Douglas. It’s so bad, it makes the original seem like a work of art in comparison. The Jewel of the Nile turns unnecessarily nasty with its racist depiction of Arabs and a barrage of racist jokes, even calling them “towel-heads.” There’s not much to like about this adventure tale, since the action is contrived, the humor is weak and overall it’s annoyingly silly and dull in too many key spots. Director Lewis Teague (“The Lady in Red”/ “Alligator”/”Cujo”)should be embarrassed for helming such an insulting pic, while writers Mark Rosenthal and Lawrence Konner have nothing to be proud of.

Successful trashy romance/adventure novelist Joan Wilder (Kathleen Turner) is on a luxury sailboat going around the world with adventurerJack Colton (Michael Douglas) and are moored in the south of France. Joan is trying to finish a high seas pirate story but can’t because she’s bored with her real-life romantic fantasy adventure and wants to return to her comfort zone in New York to get her juices flowing again.

The oily Omar (Spiros Focas) is a wealthy sheik of the fictional African country of Kadir, and is scheming to become emperor of that divided country. Omar believes by taking possession of the “Jewel of the Nile” he will be made ruler. The potentate, in Cannes, invites Joan to his party and then to his country, as he hires her to write his jazzed-up bio–which he feels will advance his political fortunes. Jack turns down the invite and plans to go on alone to Greece.

After Joan splits Jack reunites with an old associate, the angry Ralph (Danny DeVito). He feels Jack cheated him on their last adventure and wants his due reward. They are soon joined by Tarak (Paul David Magid), a Sufi and an opponent of Omar’s reign. When Omar blows up Jack’s schooner and Tarak mentions the “Jewel of the Nile” has to be removed from Omar’s possession for the rightful ruler to be crowned, the Americans reluctantly partner out of greed to join Tarak in the hope of snaring the valuable jewel by chasing after Omar.

In the meantime Joan discovers that Omar is evil and escapes imprisonment with the help of Jack, who has been on Omar’s tail. Joan also brings along fellow mysterious prisoner (Avner Eisenberg), who tells her he’s the “Jewel of the Nile.” He’s not kidding, as the “jewel” turns out to be a holy man–the spiritual leader of desert tribesmen, who ride horses while jiving to the sound of their boom boxes.

The action sequences are filled with daring escapes, desert chases, explosions, endless gunfire and a blood-thirst of the fanatical Arabs to kill the infidels.

Most of the film was shot in Morocco. 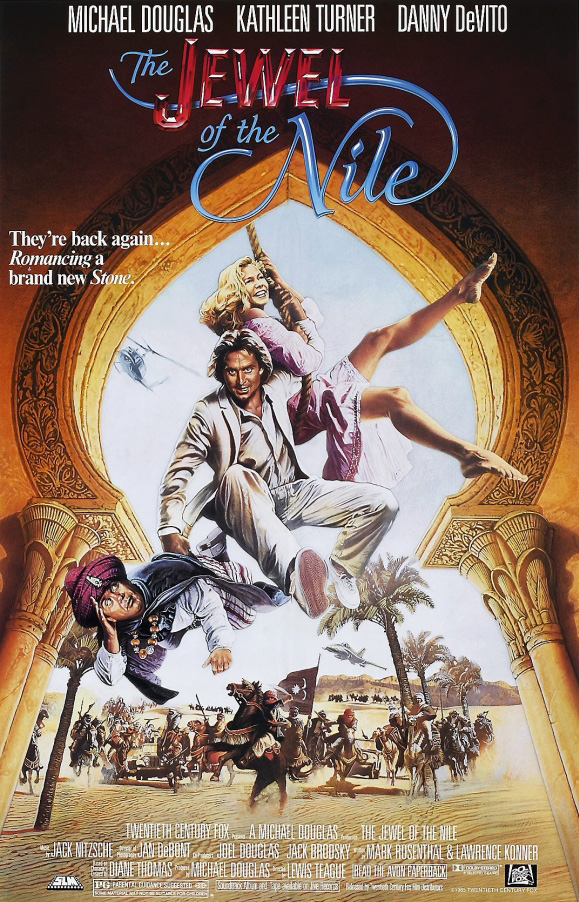