“This might be the best junkie film ever made.”

This might be the best junkie film ever made. It is set in Iowa in the 1970s and follows the observations of a young screw up, who gets the ignominious nickname of Fuckhead (Billy Crudup); it’s a name which he comes to accept as it sticks with him. The New Zealander, Alison Maclean (Crush), directed a film adapted from Denis Johnson’s book of short dramatic stories by using a sharp eye for comedy, where the addiction story plays second fiddle to the story of the psychological problems of the addict.

The film has its protagonist go from one adventure to another as he tries to make sense of his messed up life, in each episode he meets up with different offbeat characters and continues to find himself lost in this dark world of his own stupidity. Crudup goes from being a morbid dreamer to a drug addict and thief, and finally to a Savior like Jesus. Billy Crudup is simply ingenious in this sterling role as the poetic voice of the author, making the internal musings of Denis Johnson’s disjointed surreal stories come to life not quite like in the book, but in its own cinematic way. That this lyrical book was adapted to the screen is a minor miracle itself. It is certainly not a fault-free film, as it petered out toward the end. But if viewed as a story that doesn’t have to make too much sense, because a junkie’ life doesn’t make too much sense anyway, then the film can be savored for its fair quota of highs.

Characters leave the film just as quickly as they entered it, with the only constant in the story being Crudup, who keeps everything in order by his continuous voiceover. The film is divided into chapter headings which are flashed onscreen, as FH rants on like the stoned freak he is.

This episodic adventure of the irresponsible FH who is lost and undisciplined, begins on the rainy highway where he is hitching a ride to see if he can get back together with his former girlfriend Michelle (Samantha Morton). The story goes into the flashback mode as FH tells what happened to him three years ago in the early 1970s and how he met the love of his life the frizzled haired Michelle, who looks sexy walking around in her bikini panties. She is a heroin addict he meets when a guy who fell asleep in his VW takes him to a house party. The only problem he has, is that she is seeing another guy named McInnes (Ventimiglia). He is the one who gives FH his illustrious name, as he sees him kissing his girl at the party. But soon Dundun (Shannon) shoots McInnes in the stomach and he dies before the reluctant Dundun is talked into getting him to the hospital. Dundun gets FH’s help to dump the body in a cornfield.

Michelle’s relationship with the seemingly innocent but not-so-innocent FH, becomes a live-in one. The couple casually shoot heroin, something she gets him started in, while the TV plays cartoons in the background. FH is totally oblivious to things around him, serenely eating Frosted Flakes as he is too self-absorbed to know what he is doing or where he is at.

One of the more hysterical scenes is when FH converses with his morose cowboy friend Wayne (Leary) in a bar and Wayne takes him to salvage his abandoned home for scrap wires and plumbing fixtures, as they get enough money to score some heroin and return to the bar and get loaded. There might be some unintentional moral to the story at this point, as they both take the heroin but Wayne keels over dead.

The funniest scene is the one where FH is working as an orderly in the hospital’s emergency room. His partner orderly is the zany Georgie (Jack Black) who robs the dispensary of all kinds of pills, which they both pop to help them get through the long night. The comedy becomes “Pulp Fiction”-like when the two of them treat a man who comes in with a knife stuck in his eye socket, and then they go for a car ride to unwind in the snowy winter night as they decide to camp out in the wilderness and live off the land.

The most dramatic scene comes when Michelle is pregnant and FH takes her to a Chicago abortion clinic, which has vocal pro-life demonstrators in the front. The two fight over nothing and they part company. She soon goes to Mexico to live with an unappealing man called John Smith.

The film returns from the flashback mode at this point and we see FH hitchhike to Michelle’s new place where the two of them try to get back together, which will have disastrous results. FH then ends up alone in Arizona to kick his addiction problems.

While in Arizona, FH stares through the window of a Menonite housewife’s home because he is enchanted by the woman’s spiritual singing; has an absurd conversation with a fellow rehab patient (Dennis Hopper) who has a few bullet holes in him; and, he has a sexual relationship with a hard luck member of his support group (Holly Hunter), whose three husbands died.

FH finds salvation when he ends up working in a nursing home as an editor for a residence newspaper, where all of the patients are disturbed and disabled. Here he learns how to touch with his love these patients, who are even more messed up in life than he is because of their infirmaries. He says that the God who created this mess must be a madman.

“Jesus’ Son,” a title snatched from a Lou Reed song, has many glorious moments of dry humor, pungency, sadness and unpredictability; it exhibits the rare quality all special films have, it requires some effort to see what the film is about. It is a film that zig-zags all over the map with its ultimate target being pop culture in America and about a survivor of the drug culture who is so disarmingly real. FH will have his maddening story breathe life into his messed up junkie veins and give vent to dreams he has that are as relevant as if it were a genuine religious experience. 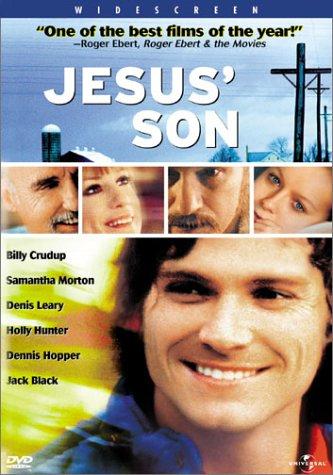