“Holds our attention because the protagonist is a good guy.”

Welder Wade Hampton (Drew Pillsbury) is a 35-year-old stuck in a dead-end assembly-line factory job for 15 years in Bakersfield, California, who impulsively quits his job by just throwing down his welder’s helmet and walking out. When his car doesn’t start, he steals his boss’s. He leaves his wife and 13-year-old son behind and begins driving toward Jerome, Arizona, a place a fellow welder, Lonnie (Marusich), gave him a postcard describing it as an ideal “artists’ community” he discovered while on vacation. The sudden plan of the taciturn Wade, is to turn his junk-sculpture hobby into a career. The destination of Jerome, a place near Sedona, acts as psychic whirlpool on Wade. It pulls him to an ideal place (much like for the main character in Dark City-1998) away from the dark world he’s in. Intercut periodically into the narrative are documentary style interviews with Hampton’s wife, his brother, and fellow workers who speculate on why he “snapped and became a murderer.”

Taking a driving break at a rest stop, Wade’s approached by a good-looking female drifter named Jane (Wendie Malick). He reluctantly agrees to give her a lift to the next town Needles, where she says her car broke down; but, he soon discovers that she not only has no apparent destination but has a checkered past, carries a gun and has drugs on her, and soon comes on to him. He’s out of his element in this desolate environment with an edgy femme fatale like Jane; and, though he knows better he falls for her gift of gab and he takes a back road away from Jerome, where they stop off to have sex in the car. When he’s ready to get on the road again the car fails to start, and Jane flags down a driver to help. But fate has it that he’s the wrong person (Scott McKenna), as he pulls a knife on Jane while caressing her thighs and she critically shoots him. Wade didn’t see what happened and he doesn’t know if he should believe Jane, but he doesn’t like her solution to the problem and the two of them show that they are cut from a different cloth. But they are similar in that both have no chance in life to succeed, they are doomed because they can’t adjust to society and can’t react correctly when things go wrong (“Detour” used the same theme).

The blue-collar worker is heading for big trouble. Wade’s caught by his inability to realize the prison he built for himself was within.

Jerome is basically a road film about Wade’s inability to get out of traps he’s stepped into. The film has the minimal amount of dialogue and holds our attention because the protagonist is a good guy, who ironically can only find freedom when he’s in a real prison. The film’s main flaw, is that it proves its point by wrapping things up with too nice of a pink bow tied around it.

This indie film is directed/written/edited by three guys who went to high school together. It was a hit at the 1998 AFI FilmFest. 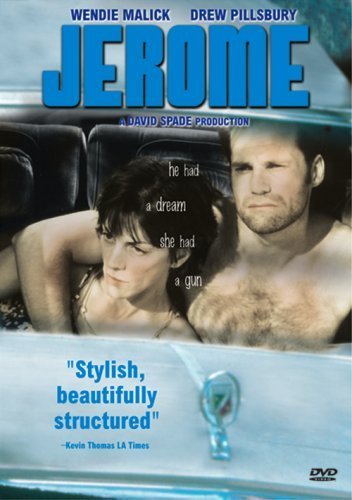