JAY AND SILENT BOB STRIKE BACK

“A gross road film comedy that’s as dim as a burnt out light bulb.”

A dumb-ass and foul-mouthed slacker film. Writer, director, co-editor and star Kevin Smith (“Mallrats”/”Clerks”) turns out a gross road film comedy that’s as dim as a burnt out light bulb. It feeds off slapstick humor and crude jokes about weed, dick, farts and queers. The titular jive-talking stoner heroes from New Jersey, the cheeky Jay (Jason Mewes) and the taciturn Silent Bob (Kevin Smith), are pissed to learn that the ‘Bluntman & Chronic’ comic strip which was inspired by them is to be made into a movie without their permission. After checking the facts out with “Bluntman” co-creator Holden (Ben Affleck) and getting wind of it on an entertainment website, the lads hitchhike from Jersey to Hollywood to stop Miramax from making the film that will star James Van Der Beek as Jay and Jason Biggs as Silent Bob. On the road the boys hitch a ride in a van with four females, not realizing they are a gang of diamond thieves. Jay falls in love with Justice (Shannon Elizabeth), who is forced by the other gang members- Sissy (Eliza Dushku), Chrissy (Ali Larter) and Missy (Jennifer Schwalbach)-to make the boys patsies in the robbery they pull off. The boys go on the run to Hollywood with the monkey they stole for the girls, who used their robbery as a diversion for their heist. In Hollywood they are turned loose in the Miramax studio during a movie shoot of Scream and try poking fun at the movie industry. Celebs such as Chris Rock, Matt Damon, Ben Affleck. Carrie Fisher and Gus Van Sant make meaningless cameos. Though these absurd antics might appeal to fans of the boys, I found the self-indulgent comedy not funny and a waste of time. 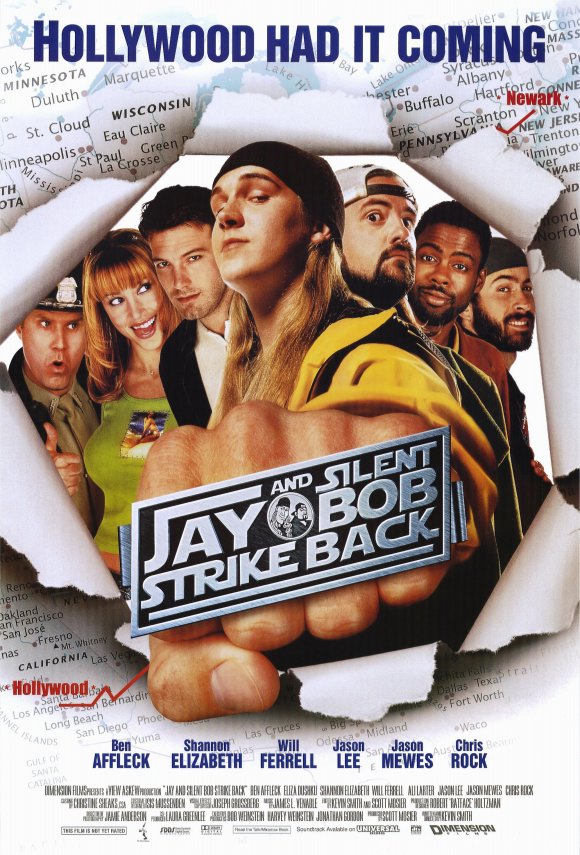