“An exciting “whodunit” that fits in with the sensational crimes reported in the tabloids.”

Richard Marquand (“Eye of the Needle”) directs an exciting “whodunit” that fits in with the sensational crimes reported in the tabloids. Joe Eszterhas provides a screenplay that comes with a few surprises that seem over-the-top (the climactic scene was contrived and unbelievable) but admittedly it held my attention throughout and the murder scenes never became overly gruesome or campy. It’s a well-crafted courtroom mystery, one that takes the usual formula and clichés for courtroom melodramas and dances around with it adding a little this and that to spice it up while still keeping it for the most part as a straightforward courtroom film.

It opens in an isolated beach house on an evening where there’s a thunder storm. A man dressed in black leather and covered with a ski mask pounces atop a frightened Mrs. Paige Forrester lying in bed and with a six-inch hunting knife that has a serrated edge slits her throat open. He has also killed her maid offscreen. Prosecutor Thomas Krasny (Peter Coyote) suspects the hubby all along when he learns that wifey had all the money and he inherits a fortune upon her death. When country club janitor Fabrizi reports seeing a knife in Jack Forrester’s (Jeff Bridges) locker, the vic’s hubby and business partner publisher of the San Francisco Times is charged with the murder. Since Jack’s corporate lawyers can’t deal with a criminal case, he eschews their advice to look for a high-profile criminal defense lawyer and instead pleads with corporate lawyer Teddy Barnes (Glenn Close) to take the case. She’s a former prosecutor in Tom’s office, who never lost a case. Teddy quit four years ago because of being used by Tom to frame an innocent man to further his political ambitions. Tom unethically held out discovery evidence, something Teddy learned about after the trial but never revealed. To make matters worse, the innocent man hanged himself in jail. Tom’s current ambition is to run for attorney general.

The divorced Teddy, the mother of two small children, evidently involved in a friendly divorce, agrees to take the case because she believes her client is innocent and that he promised not to lie. Teddy reestablishes contact with crack investigator Sam Ransom (Robert Loggia), whose instincts tell him her client is guilty but does the leg work that comes up with some startling conclusions. Teddy’s not only a believer in his innocence, but soon begins an affair with the handsome smoothy.

The film works so well because the trial scenes are riveting, as the ebb and flow of the case keeps changing with every witness. It’s set up so Jack may or not be guilty of murder, as many red herrings are presented. Only in the unexpected conclusion is the truth revealed. 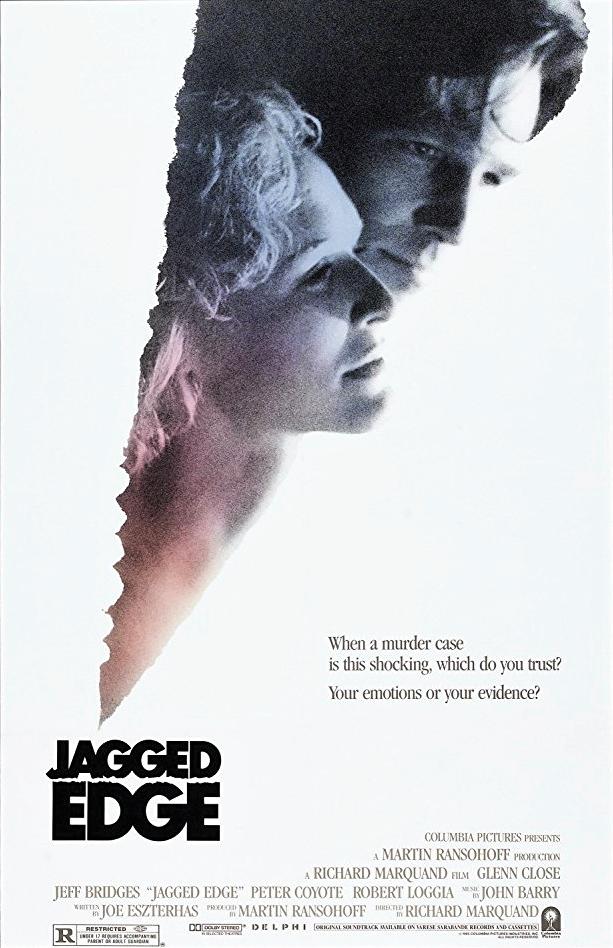