I WAS A TEENAGE WEREWOLF

“A great title but a lousy movie.”

A great title but a lousy movie. Gene Fowler Jr.(“Gang War”/”Showdown At Boot Hill”/”I Married a Monster from Outer Space“) directs this low-budget AIP film, that’s a blend of troubled youth and horror movie. It’s shot in black and white. The nonsensical schlock film registers as a bad movie cult classic that some might enjoy more than others, and can be remembered for starring Bonanza’s Little Joe as a wacko.

Troubled teen Tony Rivers (Michael Landon) is a hot-head, who always gets into fights. Tony attends Rockdale High School, whose principal, Miss Ferguson (Louise Lewis), and the local detective, Donovan (Barney Phillips), who breaks up his fights, both recommend he get help from Dr. Alfred Brandon (Whit Bissell), a psychologist at the local aircraft plant who treats problem children without a charge. At a teen Halloween party, Tony goes berserk over a prank and beats up his friend Vic (Ken Miller) and has no choice anymore in resisting treatment with the shrink. Tony is encouraged to get help by his hard working widowed night-shift aircraft plant father (Malcolm Atterbury) and his sweet girl friend Arlene (Yvonne Lime).

The shrink injects Tony with a serum and puts him under hypnosis. Brandon uses Tony to gain fame through the unscrupulous treatment of his violent behavior, in the hopes it will get national attention. The unrecognized experimental treatment causes a regression back to Tony’s primal instincts, and after just two sessions Tony turns into a werewolf. When Tony’s friend Frank walks through the woods after leaving the teen’s hangout, Tony appears as a werewolf and kills him with his fangs. A second werewolf murder occurs in the school gym, where the school bell transforms Tony into a werewolf and he slaughters an exercising gymnast, Theresa (Dawn Richard, Playboy Playmate). Though Tony’s face is that of an animal, those in the school building recognize him by his clothes and the police try to capture him as he flees into the woods. Tony evades the manhunt and in the morning after appearing normal again returns for help to the demented scientist Brandon and during the treatment session when the phone rings he turns werewolf and Brandon pays the piper for his evil deed.

The clunky story by Ralph Thornton never is more than a titillating B-film cheapie and the production values are poor, but the acting is bearable and on par with the genre’s requirement for such hokum. 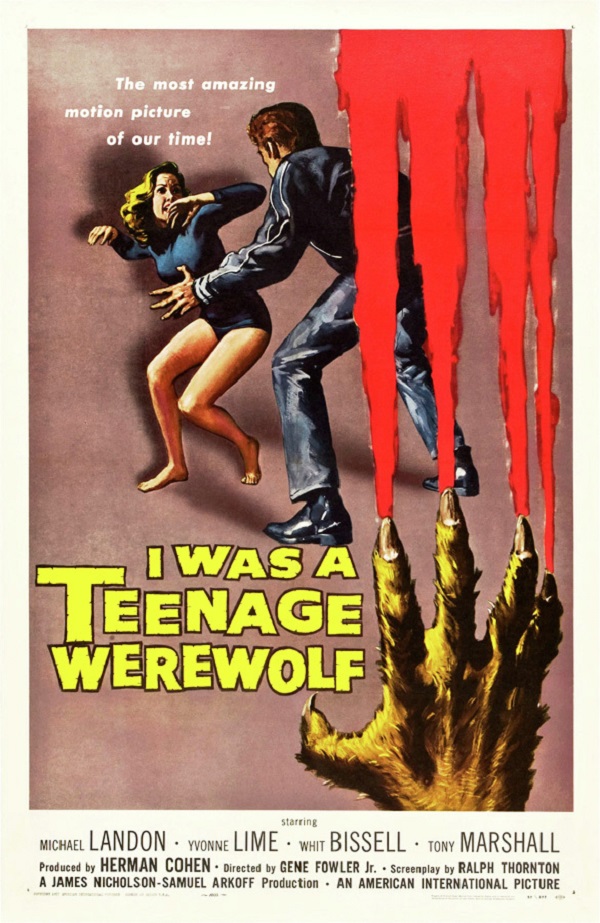