“The historical melodramatic biopic is wonderful to behold visually and for its camp.”

Though Sergei Eisenstein’s (“The Battleship Potemkin”-1925/”Alexander Nevsky”-1938) history lesson about the 16th-century despot Ivan Grozny — Ivan the Terrible — is essentially a bogus one, the historical melodramatic biopic is wonderful to behold visually and for its camp (the stagy acting and bold expressions give way to comedy rather than drama). It’s a work of great detail, compositions, and visual spectacle that forgoes for the most part Eisenstein’s principles of Montage that made him internationally famous. Eisenstein made many sketches for every scene and when the cameras rolled he brought those visions to fruition in the filming. It was filmed during the middle of the war from 1943 to 1944 and was released in 1945, at the Alma Ata studios in Central Asia, which came under attack by the Nazi war planes. It was meant to be a trilogy but only two parts were completed, as Eisenstein died at 50 before he could begin work on the third part. Stalin approved the first part but objected to the second part (the way the monster was portrayed bore too close a resemblance) and it wasn’t released until 1958, ten years after Eisenstein’s death.

The first part deals with the charismatic hammy Nikolai Cherkassov playing Ivan IV (1530-1584), archduke of Moscow, coming to power by crowning himself Tsar at the age of 16 in an effort to unite a weakened and divided country and reclaim territory held by foreigners. He’s faced with foreign enemies such as the Tartars, Livonians, and Germans, and faced with internal strife from the Boyars, a princely family that objected to his despotic rule as being unprecedented. He further angers the nobles when he goes against tradition and marries a Russian girl, Anastasia Romanovna (Lyudmila Tselikovskaya), instead of the usual foreign princess.

There are spectacular black-and-white scenes of the pomp and ceremony and underlying court intrigue in his coronation, and the passion felt in his baroque wedding to Anastasia. What follows is his long but successful campaign against the Tartars in Kazan that is waged by his ally Prince Kurbsky (Mikhail Nazvanov), whereby the Tsar gets all the credit. Later the Tsar becomes ill and seems to be dying, but mysteriously recovers and initiates a campaign against his enemies. The Boyars are singled out for persecution, as they are suspected of being the conspirators who poisoned his wife; they are led by his insiduous aunt Euphrosinia (Serafima Birman), who refuses his order to swear allegiance to his one-year-old son. His aunt, also, schemes with the warrior prince Kurbsky to betray the Tsar and back her feeble-minded son Vladimir in his bid to be king. The Tsar underestimates his enemies and instead of eliminating them continues his policies to rid Russia of foreigners by waging war in the Baltic with Prince Kurbsky leading his forces and in the Crimea with a so-called nobody nobleman Basmanov (Amvrosi Buchma) leading his troops. They both lose in battles taking place off camera; their loses are blamed on the interference from the Boyars. To live for another day, the Tsar goes on a self-imposed exile in Alexandrov, vowing he will return with the petition of the Muscovites (playing politics that he will get the common-man behind him) and bring glory and greatness to his rule by eliminating all those who oppose him. The Tsar plans to regain complete control of Russia by confiscating the wealth of the aristocratic Boyars and by merging the proletariat into a loyal and fierce army, receiving supplies from a secret deal he made with England to adequately arm his fighting forces. 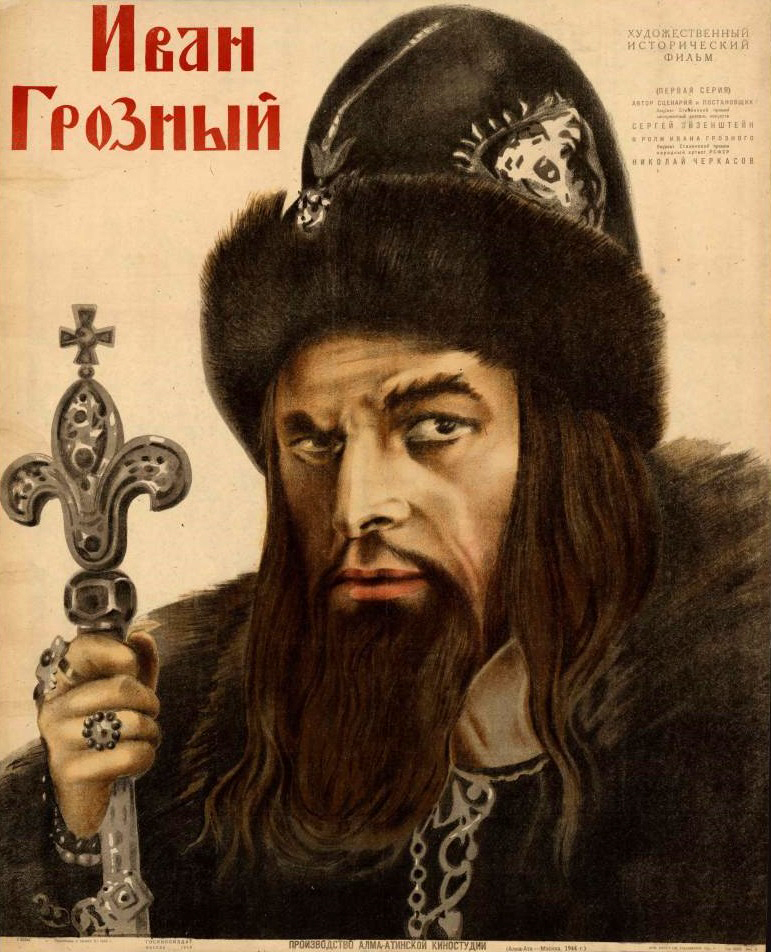