“It’s an entertaining medieval costume epic that presents an inaccurate version of literature and history.”

Based on Sir Walter Scott’s 1819 historical novel; directed by Richard Thorpe (“The Prisoner of Zenda”/”Jailhouse Rock”) and written by Noel Langley and Aeneas MacKenzie. It’s an entertaining medieval costume epic that presents an inaccurate version of literature and history, as to be expected from a Hollywood film. It received three Oscar nominations including Best Picture.

Robert Taylor plays the noble Saxon hero Wilfred of Ivanhoe who has returned from the Third Crusades to the Holy Land to find that King Richard the Lionhearted is held captive by the Austrians and kept there by the intrigue of his evil brother Prince John (Guy Rolfe), who is trying to steal the throne from Richard, and his evil Norman allies, who refuse to pay the Austrian king’s ransom of 150 thousand marks required for his release.

Not believing the rumors that Richard died in battle, Ivanhoe poses as a minstrel as he rides alone on horse through Austria searching all the castles for his master when he stumbles upon the imprisoned king who is able to drop a letter to him from his cell. Knowing his king is alive, Ivanhoe returns to his homeland to raise money for the ransom. Still disguised as a minstrel, Ivanhoe leads an enemy Norman party led by Sir Brian de Bois-Guilbert (George Sanders) and Sir Hugh De Bracy (Robert Douglas) to the castle of his father, Cedric (Finlay Currie), so they can get shelter and food. Father and son have not been on speaking terms since the son against his father’s wishes went off to fight with Richard. Ivanhoe reunites with his betrothed, the beautiful Lady Rowena (Joan Fontaine), staying in Cedric’s castle as his ward; steals his father’s Fool, Wamba (Emlyn Williams), and makes him his loyal squire; saves the wealthy moneylender Jew, Isaac of York (Felix Aylmer), from being robbed and possibly killed; and meets with his estranged father in secret but receives no satisfaction but soon learns from Rowena that his father in secret really cares about him. Ivanhoe escorts Isaac home and meets his lovely daughter Rebecca (Elizabeth Taylor), who swoons over him. Isaac asks how he can pay Ivanhoe back for saving his life and is asked to raised money to pay Richard’s ransom. When Isaac replies that Richard persecuted the Jews, Ivanhoe promises no more persecutions and warns that John and the Normans are even more anti-Semitic.

The heart of the film has Ivanhoe conflicted over his love for the two beautiful women, entering jousts, trying to raise money for Richard’s ransom, getting free from capture by Guilbert with the help of Robin Hood (Harold Warrender), and after freeing Richard doing the same for Rebecca–who is tried by Prince John as a witch, so as to tell the English people that his brother can no longer rule because he fell into the hands of the infidels.

For all its faults (mainly poor pacing and a listless script), this adaptation of the Sir Walter Scott classic sparkles because of its excellent cast and remains as one of the better Hollywood swashbucklers. 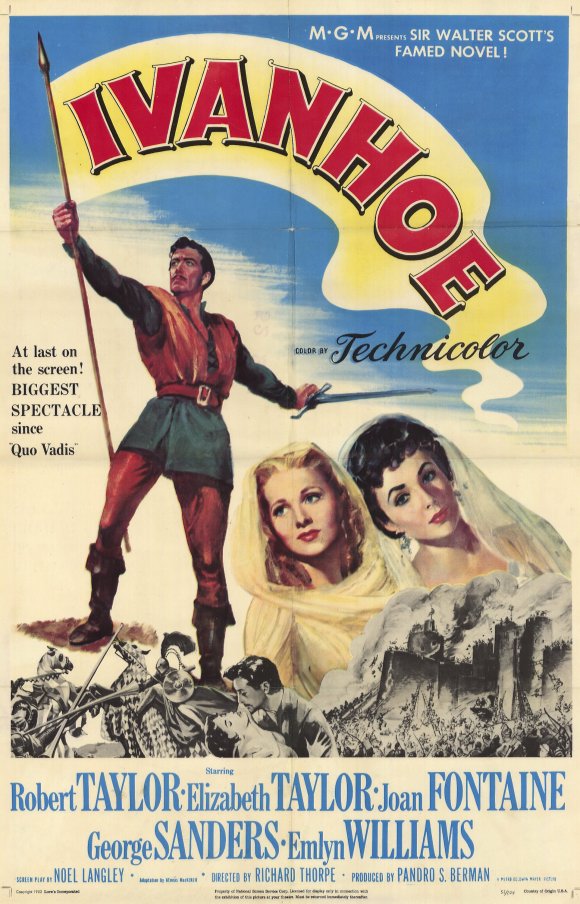