“It’s an amazing film for how it shows the Hollywood studio system couldn’t tolerate creative artists and to what lengths they would go to destroy those who don’t play by their rules.”

Orson Welles after completing Citizen Kane was acting in “Journey Into Fear” and in the midst of editing “The Magnificent Ambersons,” the film he just completed directing, and accepted the offer, in a patriotic gesture, by RKO and Nelson Rockefeller, in 1942, to make a cultural exchange film in Brazil that would be used against any Nazi influence in that country; it was part of President Franklin D. Roosevelt’s “Good Neighbor Policy” of WWII. The filmmaker was appointed an “ambassador” and was commissioned to shoot a three-part film that captured the democratic benefits of the country. It became Orson Welles’ legendary uncompleted film, as the new hostile bosses at RKO were aghast at the film’s pro black stance (after looking at footage of the annual carnival in Rio de Janeiro and seeing so many blacks happily jumping around) and that the film backed the country’s poor for more social benefits, which labeled in their eyes Welles as a Communist. The studio cut off funds, fired Welles and the film was never released, but Welles went on to try and finish it without studio funds because he felt a sympatico with a people he came to love and thought he could help them by getting their story known to the world; but this decision greatly damaged his career, as he was unable to get work for years because the studio bad-mouthed him as an enfant terrible and someone no studio could work with.

While Welles was stuck in Brazil, preview audiences didn’t respond well to “The Magnificent Ambersons,” so the studio, without his approval, chopped it up and even gave it a happy ending. They ruined a masterpiece in their folly.

The lost documentary film, shot mostly without sound, was found in 1985 in the form of unedited rushes and was wisely put together as is by Richard Wilson and film critics Myron Meisel and Bill Krohn. The film has three parts: “My Friend Bonito,” “Carnival” and “Four Men on a Raft,” and it’s the last part that is shown in its entirety. Here four impoverished fisherman from Fortaleza, a small rural village in the northeast, go on a raft without a compass 1,600 miles to Rio in open ocean waters as a protest that fishermen are forced to live in a feudal society and don’t receive proper government social benefits. The journey made the fishermen national heroes, but turned President Vargas of Brazil, really a typical S.A. dictator, against the filmmaker. The first segment was filmed in Mexico and showed animals in a farming village being blessed by the local priest in a festive ceremony. The carnival segment, shot in both dazzling technicolor and black-and-white, uses the history of the samba as its theme.

It’s an amazing film for how it shows the Hollywood studio system couldn’t tolerate creative artists and to what lengths they would go to destroy those who don’t play by their rules. This one is essential viewing, even if the film-within-the film has lost its timely purpose and now can’t excite us as much as it could have if released when it was supposed to be. 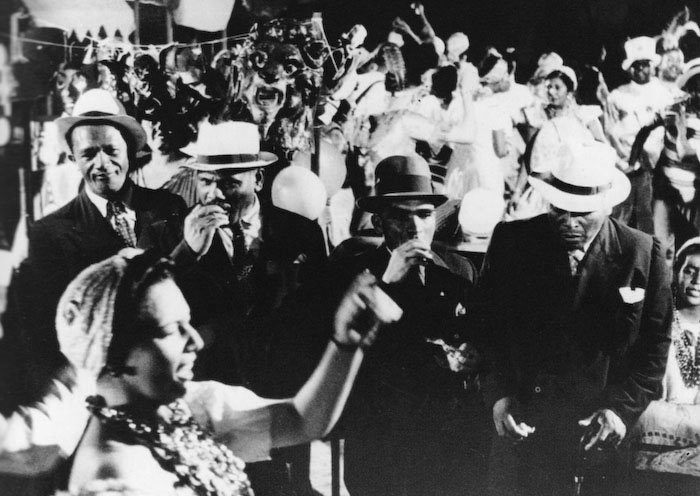