IT HAPPENED TO JANE (aka: MISS CASEY JONES TWINKLE AND SHINE)

“An amiable but stiff populist comedy that should have been funnier since it starred the talented Doris Day, Jack Lemon and Ernie Kovaks.”

An amiable but stiff populist comedy that should have been funnier since it starred the talented Doris Day, Jack Lemon and Ernie Kovaks. Director Richard Quine (“My Sister Eileen”/”The Solid Gold Cadillac”/”The World of Suzie Wong”) keeps the insignificant story TV sitcom mediocre, over cutesy and too wholesome to show an edge. Also the convenient tepid love story proves to be a drag. It’s based on the story and screenplay by Norman Katkov. The film bombed at the box office despite the popularity of the stars and was re-released under the new title Miss Casey Jones Twinkle and Shine, but bombed again.

Spunky girl-next-door type lobster restaurant supplier Jane Osgood (Doris Day) lives in the rural coastal town her relatives founded back in the Revolutionary Days, Cape Anne, Maine, and uses the E & P Railroad for deliveries. The attractive Jane is a widow with two small children, Betty (Gina Gillespie) and Billy (Teddy Rooney, Mickey’s kid), who is struggling to survive on her own. When her livelihood is threatened because the railroad didn’t deliver her crustaceans on time before they died, causing the country club restaurant client to cancel the contract, Jane’s friend from childhood and current love interest, Cub Scout leader and attorney George Denham (Jack Lemon), sues the E&P. When Jane refuses to settle for an out of court settlement for a puny $700, the case goes to the local court and Jane wins but the railroad appeals. The railroad’s boss is the ruthless Harry Foster Malone (Ernie Kovacs), who channels Orson Welles in Citizen Kane, and the skinflint refuses to give the little person an inch.

The heart of the film involves the long legal tug-of-war between the idealistic economically struggling underdog country woman of the people and the wealthy heartless railroad magnate from the big city. There are a number of subplots that include Jane being romanced by a handsome NYC reporter, Larry Hall (Steve Forrest), covering her side of the story, while the jealous but tongue-tied when it comes to marriage George does a slow burn.

The newspaper stories draw an overwhelming show of public sympathy for Jane that sweeps across the country so that through this good publicity she’s able to take on the giant corporation single-handed, even turning up at the tycoon’s stomping grounds of Manhattan to appear on television shows like “I’ve Got A Secret” and “The Big Payoff.” This is an excuse for cameos from the following TV personalities: Gary Moore, Bess Myerson, Betsy Palmer, Dave Garroway, Bob Paige, Bill Cullen, Jayne Meadows and Henry Morgan.

The whole darn thing was meant to be taken tongue-in-cheek, as a sunny Capra-esque comedy showing how the American system works so well. But it’s so blah that it just has a hollow ring and never becomes engrossing. 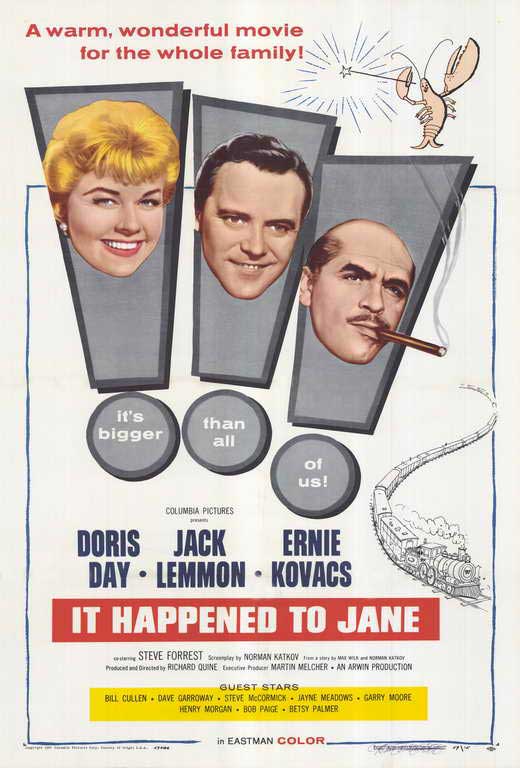