“I Stand Alone” whose French title, Seul Contre Tous, literally means “Alone Against All,” is the first feature of the 35-year-old Argentinian-born Gaspar Noé, whose previous work was a 40-minute short called Carne. This one is surprisingly sensitive as well as genuinely shocking (like Taxi Driver–it’s about the loner who can’t adjust to society). It tells about the life of a failed native born Parisian. He’s an unemployed butcher (Philippe Nahon), who unleashes through a voiceover a nonstop stream of conscious venom that is racist and marked by class conscious divisiveness. It’s also homophobic and misanthropic. Nahon draws so much out of his character’s need for survival, as he astonishingly says all the ugliest politically incorrect things that are on his mind (everything is in his head as he talks to himself throughout); and, as egregiously distasteful and full of hatred as his discourse is, he gains our sympathy or at least our interest because we see something in him that is either salvageable or else he frightfully reminds us that he’s openly spewing thoughts we might keep only to ourselves because we are ashamed to admit we have them.

Nahon is in a role as a mind fucker. He is the film’s antihero who talks to himself about how shitty life is, and how it’s no big deal to die and how he’s going to get even with those who do him wrong.

In a rapidly dismissive way, Nahon tells us in the opening few minutes of the film about his rotten life and why he’s a loser and his life has no meaning. Nahon was born in 1939 in Paris and never saw his father, but learned when he was 6 that his father was a communist who was killed by the Nazis in a death camp. His mother abandoned Nahon when he was 2 and he grew up as an orphan. At 14 Nahon learned a trade as a butcher and worked hard at it, and when he was 30 he opened up his own horse meat butcher shop in Aubervilliers. Two years later Nahon meets a factory worker from across the street and after a quickie in a flophouse hotel nearby, he had a daughter named Cynthia. But the mother soon abandoned Nahon and left him to raise the girl. When she had her first period, she came running down to the butcher shop all bloody giving him the impression she had been raped. The sight of her so infuriated the butcher, that he ran after the worker who only propositioned her but he thought had raped her. Not catching up with him, Nahon stabbed a completely innocent worker who was in the wrong spot. For that crime he was sent to prison, and lost his butcher shop to bankruptcy and his mentally retarded daughter was sent to an institution.

The story picks up to the present when Nahon is 50. He is living in the Lille suburb with a nasty fat woman who at that time owned the bar he worked after his prison release and they now live with her dull mother in her cramped apartment in a housing project called the Pablo Picasso Towers. Nahon can’t get work and lives off of her, which she verbally chides him for every moment she can. The fat lady reneges on her bargain to rent a butcher store, which sets Nahon off in an even more acerbic discourse than usual.

Things become more than hectic after Nahon loses a job trial at a deli because he refuses to smile and he reluctantly becomes a night watchman at a rest home. On that job he walks a young attractive nurse home who is upset that someone died in her care, and he is spotted by his girlfriend’s friend. When Nahon returns home late at night after dropping off the nurse and seeing a porno flick afterwards, he’s not able to control himself any longer from all the bombs seemingly going off in his head as his lady nags him about the young woman. He punches her in the stomach repeatedly and probably aborts the child, which causes him to mutter to himself: “Your baby’s hamburger meat; he lucked out not having to look at your lying face.”

The viewer is tuned into the possibility of more real violence at any time, but especially as gunshots are heard offscreen throughout. But except for a few occasions, the violence remains all in his head.

Nahon bitterly leaves Lille, taking his girlfriend’s mother’s gun and hitchhiking to northern Paris to return to his roots.

The film picks up in intensity, as everything in his hometown turns even more sour. Things seem to be heading to a violent conclusion. The butcher is nearly broke, he’s looking desperately for work, looking up old friends for help and being turned down by everyone. Nahon gets into a few disputes with outsiders in a bar, and into a strange sexual scene with a junkie whore he goes with even though he’s not attracted to her. Finally Nahon visits Cynthia at the institution, promising the authorities he’s taking his daughter to the Eiffel Tower– but instead takes her back to the hotel she was conceived in and the one he’s currently staying at.

The film was brilliant; it was scary; it was acted by Philippe Nahon with great force and valor; it was punctuated with so much of an ambiance for violence, that a bloody conclusion seemed inevitable.

How it ends is never made clear, but is subject to your own opinion. Apparently the butcher didn’t go through with killing his daughter and then killing himself as played out onscreen, which is how the viewer first sees the conclusion. I tend to doubt if he carried through with his intent on incest, and then to murder his daughter. Nahon thought about both, but almost everything is a mind thing and these are just more examples. What most likely happened is the butcher, who has always been a survivor, will come out of this dark period even with a darker mood than before. But Nahon will be sustained understanding man must be moral. The butcher faintly reaches out for that better side of himself. He’s been short-changed by life and therefore had no chance to know what love and goodness meant to him.

Nahon is the dark unconscious archetype of the French common man. There are many faceless and alienated men like him living in a modern world they can no longer grasp because it has become increasingly foreign. The only ones the nameless butcher can feel any passion for are those who are even more vulnerable in their own country than he is and just as French–his autistic daughter and a much younger caretaker who is scared of death, both of whom can’t face life and are therefore also weaklings he can readily identify with and show honest passion for.

The butcher’s fantasy life is his only salvation, just like the poet can only survive in his imagination. The difference between the two madmen types, is the difference between a true thinker and someone who can’t think straight. Or if you want, it’s the difference between a mind that is filled with hate as opposed to someone who wants to control his evil urges by understanding them. The butcher is someone who can’t function in this world because he can’t think straight, and the education he gives us about such an inarticulate venal outsider is laced with poisonous antidotes and treacherous homilies for disaster. But what this film does better than most films on this subject, is not mince its words and clean it up for our approval.

“I Stand Alone” is honest, energetic, and not a genteel social commentary–but one that is meant to grab the viewer by the lapels and shake him out of his lethargy about the real politics (films). 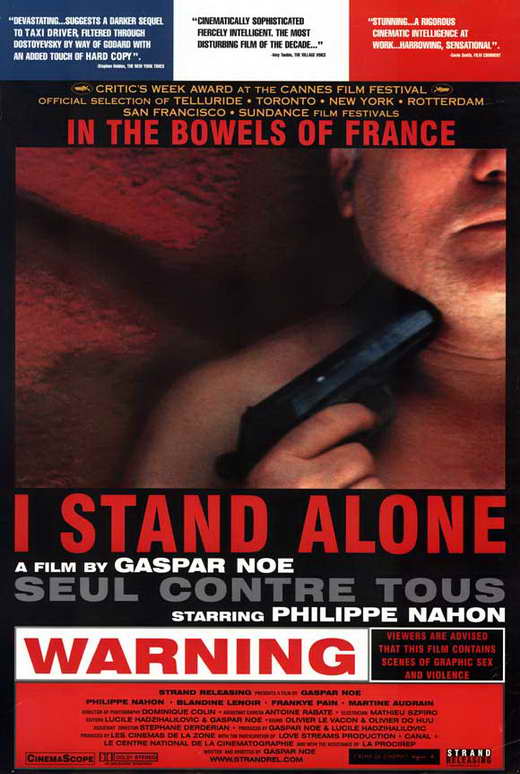